In their quest for survival, plants have produced an astonishing variety of chemicals, known as secondary metabolites. These chemicals are often used to scare away herbivores, protect against pathogens and neighbors or mitigate the effects of radiation, among many other uses. Interestingly, many of these chemicals interact specifically with the human body, ranging from organ failure and death, until the reactions, which became the inspiration for the creation of life-saving pharmaceuticals. Below is a list of plants, which amazingly affect the brains and mental states of people, who eat them. 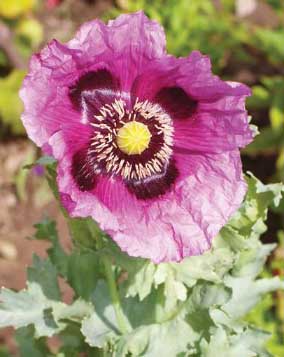 The beautiful opium poppy comes from Turkey and is a common garden plant in the United States. After cutting unripe capsules with seeds, milky latex comes out of them, which is a source of raw opium and can be converted into morphine, codeine and heroin. Heal you, known as opiates, they exert their main influence on the brain and spinal cord. Although their main activity is pain relief or suppression, these drugs also relieve anxiety, they induce relaxation and calming down, and may also induce a state of euphoria or other elevated mood. Heroin is especially known to induce intense ecstatic reactions, which spreads warm throughout the body, glowing feeling. Opiates also have important physiological effects: they slow down your heartbeat and breathing, suppress the cough reflex and relax the smooth muscles of the digestive tract. Chronically drug users develop tolerance and require ever higher doses, to achieve the same effect. Heroin and morphine overdoses are often fatal. 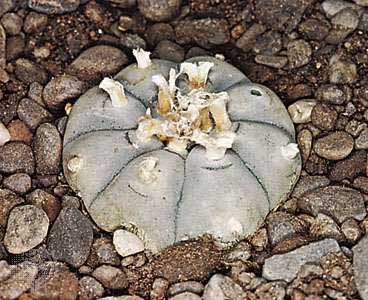 Peyote is a small cactus found only in the Chihuahuan Desert of southern Texas and northern Mexico. The tops of the cactus can be dried, creating “mescal buttons”, which are well known for their hallucinogenic effects and include the alkaloid mescaline, among others. Hallucinatory effects vary widely from person to person, and even in a given person, depending on experience with the drug. These differences seem to reflect such factors, like the person's mood and personality, and the environment, in which the drug is administered. Hallucinations are usually visual, less often auditory. Side effects include nausea and vomiting. Pejotl, like most other hallucinogenic drugs, is not considered addictive and is considered by cultists and some observers to promote morality and ethical behavior among Native Americans, who use it ritually. 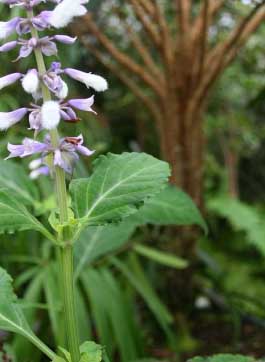 Herbal sage, inconspicuous member of the mint family, made headlines due to its growing popularity, including its use by American singer Miley Cyrus. The plant native to Mexico is hallucinogenic and has historically been used by shamans to achieve altered states of consciousness. Leaves are now both legal in the UK, and in the United States. The leaves can be eaten or roasted and contain an active ingredient known as salvinorin A., which activates specific nerve cell receptors. The effects are intense, but short-lived and involve changes in mood and bodily sensations, visions, sense of detachment, and altered self-perception. Proponents of this plant emphasize, that the effects are spiritual and they argue, that you, who will try to use it as a "party drug", they will be disappointed in its operation. 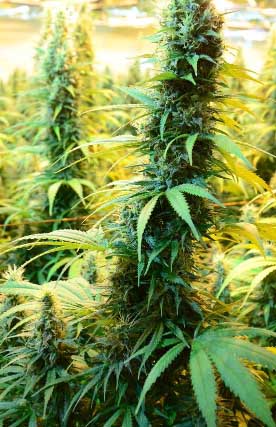 Cannabis cultivated all over the world (marijuana) it is probably the most widespread plant with psychoactive properties. The plant, known for its characteristic leaves, is used in religious practices in India and Africa (and possibly elsewhere), and is sometimes used illegally in the United States and Europe, although its legal status changes in many places. The active substance, tetrahydrokannabinol (THC), it is present in all male parts, as well as female plants, but it is most concentrated in the flowering tops of female plants. These buds are usually dried and crushed and stuffed into pipes or shaped into cigarettes (twists) for smoking, but they can also be added to food and drink. Psychological effects prevail, the user frequently experiences mild euphoria and changes in vision and judgment, which distort time and space. Acute poisoning can sometimes cause visual hallucinations, bow, depression, paranoid reactions and psychosis lasting four to six hours. The physical effects of marijuana include reddening of the eyes, dry mouth and throat, a moderate increase in heartbeat, tightness of the chest (if the drug is smoked), somnolence, instability and lack of muscle coordination. Hashish, a stronger form of the drug, it is made by collecting and drying the plant's resin and is about eight times more potent than marijuana, usually burned in the United States. 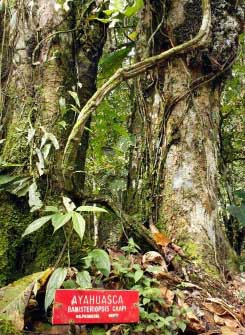 Ayahuasca is a South American grape used as the main ingredient in the psychoactive drink of the same name. This brew, culturally important to many peoples of the Amazon, has gained popularity among tourists looking for a spiritual awakening, especially in Peru. Is said to be, that ayahuasca generates intense spiritual revelation, and users often report a feeling of "rebirth" and a deeper understanding of themselves and the universe. However, some users experience significant psychological stress under the influence of the drug, and a number of deaths have been reported. 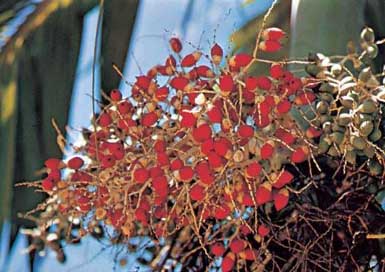 Although this is not well known in the West, chewing betel nut is a habit in about a tenth of the world's population, and betel nut is considered the fourth most common psychoactive drug in the world (after nicotine, alcohol and caffeine). Betel nut grows on the areca palm and is grown in India, Sri Lance, Thailand, Malaysia and the Philippines. A chewy betel quid is formed by wrapping a small piece of areca palm seeds (betel nut) in the leaf of an unrelated betel pepper plant, together with slaked lime granules (calcium hydroxide). Chewing betel nut releases a host of addictive alkaloids, which cause a feeling of mild euphoria, and common users often have reddened teeth and lips. Although it is important in many South Asian cultural traditions, Chewing betel nut has many serious health problems, including cancer of the mouth and esophagus, and is of increasing concern to health officials. 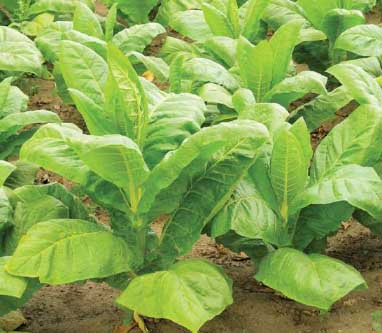 Native to the Americas, the tobacco plant has distinctive large leaves, which are a particularly concentrated source of nicotine. Nicotine is the main active ingredient in the tobacco used in cigarettes, cigars and snuff and is addictive. This drug has a unique two-phase psychoactive effect: inhaled with short breaths has a stimulating effect, while smoked in deep draws, it may have a calming effect. This is why smoking can be stimulating at times, and in others, block stressful stimuli. Nicotine, taken in higher doses, is a highly toxic poison, which causes vomiting and nausea, headaches, stomach pain, and in severe cases, convulsions, paralysis and death. The use of tobacco causes many health problems, including cancer and emphysema, and causes over five million deaths each year. 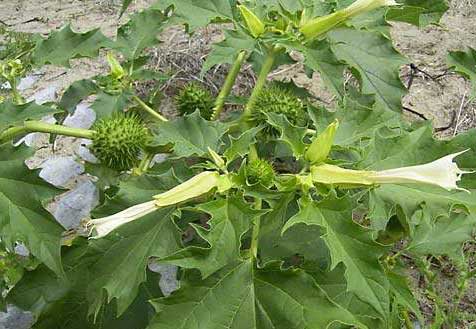 Jimsonweed grows in much of North and South America. It is a showy white weed annual plant, tubular flowers and thorny seed pods. The leaves and seeds contain strong alkaloids (hyoscoamine and hyoscine), which cause hallucinations. Used ceremonially by many indigenous peoples, jimsonweed acts as a deliriant and can cause intense spiritual visions. However, it is very dangerous, and careless use can easily lead to death. Users often report frightening hallucinations and paranoid delusions under its influence and may experience long-term side effects, such as blurred vision after taking it. Many of them don't try it a second time. 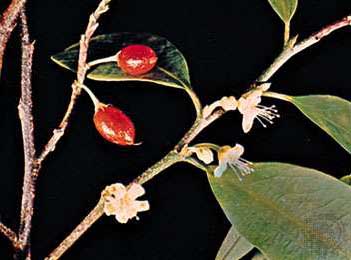 Coca is a tropical shrub found in certain regions of Peru, Bolivia and Ecuador. Its leaves contain the alkaloid cocaine and have been chewed for centuries by the Indians of Peru and Bolivia for pleasure or to withstand harsh working conditions., hunger and thirst. However, the leaves can also be processed strong, white, crystalline powder, which is injected, roasted or otherwise eaten. When consumed in small amounts, cocaine produces a feeling of well-being and euphoria along with a reduced appetite, relief from fatigue and increased mental alertness. Cocaine is an addictive substance, and when taken in larger amounts and with prolonged and repeated use, it causes depression, bow, irritability, problems with sleeping, chronic fatigue, mental confusion and seizures. A toxic psychosis may develop, including paranoid delusions and disturbing tactile hallucinations, in which users feel, that insects crawl under their skin. Cocaine abuse, which for most of the 20th century. was a marginal drug problem, at the end of the 20th century. in several countries it has risen worryingly, and cocaine has become responsible for the significantly increased rate of drug-related deaths.