Piotr Gąsowski (Born. 16 April 1964 in Mielec) – Polish actor. In year 1986 graduated from the PWST in Warsaw. He made his debut on the theater stage in 2006 1987. He has performed in theaters: Comedy (1986-1989) and New (1989-1994), and in the Tercet cabaret, that is a quartet, who took part in the TV productions of the Gala of the Feast Song and W oparach absurdu. He graduated from the PWST in Warsaw in 1986 Year. He gained stage experience in Warsaw theaters – first in Comedy (1986-1988), later in Nowy (do 1994), in which he played, among others. the role of Gombrowicz in the performance “Czomber z Gombra”. He made his debut on the big screen with a small role in the film “Daimler-Benz limousine” in dir. Filipa Bajona (1982). At that time, he was a student of the final grade. He played his first major roles in “Ring with a crowned eagle” Andrzej Wajda (1992), “Balanga” Łukasz Wylężałek (1993) and the series by Jerzy Gruza “Forty years old twenty years later” (1993). You can see it in “Billboard” Łukasz Zadrzyński, “Gold of deserters” Janusz Majewski, “Jacob, liars” Peter Kassovitza i “Awesome vacation” Mark Piestrak. The list of films with the participation of Piór Gąsowski also includes titles: “A woman at war” (“Woman at War’ dir. Ed Benett, “Controlled calls” dir. Sylwester Chęciński, “Country of the world” dir. Maria Zmarz-Koczanowicz, “Nothing funny” dir. Marek Koterski, “For what?” dir. Jerzy Kawalerowicz, “Bar Atlantic” dir. Janusz Maje oski, “Doctor Semmelweis” dir. Roger Andre. He also appeared in television series: “Dom” (series III, “Crossing the Line” (multi-production), “WOW ‘ and German “Star Star”. Moreover, he has participated in Polish and foreign TV films: “Decrease”, “no two” (French production), “The beauty of Warsaw” (French production) i “Call”. He is also known for his roles in TV Theaters: “A starvation ration” dir. Sylwester Chęciński, “Learned whiteheads” dir. Andrzej Barański, “Ketchup Schroedera” dir. Filip Zylber, “World” dir. Leszek Wosiewicz, “Gardener's dog” dir. Jacek Gąsiorowski and many TV programs: “Fumes of absurdity” dir. Andrzej Zaorski, “The third element” dir. Andrzej Strzelecki, “Tango criminal” dir. Wojciech Młynarski. His name is also associated with cabaret “third, that is a quartet”. This group was the attraction of such stage and television programs, how “The gala of the feast song” whether “In the fumes of absurdity”. He won the Grand Prix at the acting song review in Wrocław in 1993 R. 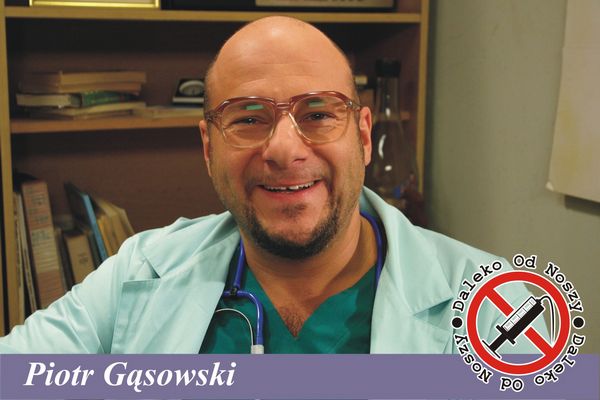