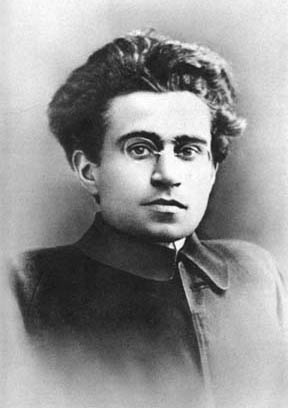 There are people in history, who though, that they are not closely related to any religion, they live a life proper to the saints. Characters like Nelson Mandela come to mind, Jacek Kuroń or Mahatma Gandhi. The Italian philosopher is also such a person, Antonio Gramsci.

The stories of these characters are surprisingly similar. Despite the various characters - from charisma (Mandela) to the personality of a silent official (Gandhi), from extrovertism (Curon), to morbid shyness (Gramsci). Everyone got involved in politics as if unintentionally. Gandhi and Mandela were lawyers, and Kuroń in scouting. Gramsci supported his siblings by working as an accountant. Injustice drove them to action. As a result, they all went through the prison:

Curon – 7 Years, spread over three sentences: two biennials, divided one into three and a half years

I wszyscy oni nigdy się nie poddali, they never went against their ideals.

Come on, that I will tell you about the least known of them. About a hunchbacked and sickly Italian from a lost village in Sardinia.

Gramsci was born in the village of Ales, near Cagliari in the Italian Sardinia village 1891 Year, as the fourth of seven children. His family was poor, however, up to 1897 Year, when his father was unjustly thrown into prison, it functioned fairly properly. However, when the head of the family stopped bringing home a clerical salary, the situation has become dramatic. The family began to starve.

Antonio Gramsci himself was so sickly, that his mother expected him to die at any moment. For years, she dressed him in his best clothes for the night and put him in his coffin, expecting sincerely, that her favorite child would not make it through the morning.

To make matters worse, in the year his father was arrested, the maid unfortunately dropped the little boy. The fall gave him a horrible hump on his back and another on his chest. Gramsci was just an adult 146 centimeters tall.

The family's economic situation was so dire, that Gramsci, despite the excellent results, he was forced to leave school at the age of eleven. He managed to get an elementary school diploma and ... started he managed to get a job at the tax office in Ghilarza.

Even after dropping out of school, young Antonio continued his education. Finally, despite the lack of money, he resumed his education at the high school in Santu Lussurgiu. During this period, he shared a tiny room in the town with his brother, where they were both almost starving. Father, who has already been released from prison, he sent them money extremely irregularly.

Despite significant health problems, he graduated from high school and with excellent grades. There was a year 1911 and at the age of twenty, Antonio received a scholarship, enabling him to study at the prestigious University of Turin.

He chose literature there. Cold apartments and a poor diet led to a further deterioration in his health, however, he lasted four years and before leaving the university, St. 1915 Year, received a thorough education.

His interest in politics developed at the university and after he left its walls, started working as a journalist for the left-wing daily Avanti!. He watched the outbreak of the Bolshevik revolution with fascination. In 1919 Year, Together with his friends, he founded his own weekly, with the telling name "L'Ordine Nuovo" ("New order").

As you can read in his memoirs, he decided to "go against an unjust order, who destroyed the mother's health and took away my father's honor ".

In 1921 He joined the Communist Party and in numerous speeches he expressed his fear of the growing power of Italian fascism. About respect, what this little one enjoyed, sickly and humped Sardinian, let the fact prove, that in 1922 He was sent as an Italian delegate to the communist congress in Moscow. He stayed there for 17 months. Upon his return, he was accepted into the party's management. At that time, he married Julka Schucht, who was five years his junior.

Intelligence makes me a pessimist, but by will I become an optimist. Gramsci

Gramsci was arrested on November 8 1926 Year, despite having parliamentary immunity. Fascist government hastily, the very next day, voted "Exceptional rights", taking the fake attempt on Mussolini's life as an excuse. Due to new laws, arrest became legal.

In a puppet process, the prosecutor pronounced the famous: “For twenty years we have to stop this mind from functioning!”. Gramsci was sentenced to twenty years, five months and four days in prison. He was imprisoned in Milan, and later transferred to Rome.

His situation in Fascist Italy was hopeless. However, he never planned to give up. After three years of efforts, received permission from the authorities to keep notes. So, In 1929 Year, zaczęły powstawać słynne „Zapiski więzienne”.

Reading this work is fascinating in itself, but when we realize, that the author did not have access to any books and any quote (and there are hundreds of them) is quoted from the head, almost always flawlessly ... we gain enormous respect for this thinker.

For eleven years, treated terribly, malnourished and untreated, Antonio Gramsci did not stop writing. He died in 1937 Year, just 46 years old due to internal hemorrhage.

After his death, sister-in-law Tatiana, she smuggled out of prison left by him 33 books and with the help of diplomatic mail sent them to Moscow. Only thanks to this, they have survived to this day.

His notes slowly appeared in the Italian press in the 1950s, in the sixties he was already - posthumously - recognized as a leading Italian thinker.

As a result, Gramsci left an extremely strong mark on contemporary European thought. Both in the field of philosophy, sociology and political theory of the present left.

Concepts such as "cultural hegemony" or "historical block", they entered the language of political and social science forever. It was he who developed the concept of absolute historicism and confronted Marx, criticizing his philosophical materialism and economic determinism.

He was one of the few, of the then socialists, who see a way to improve the living conditions of the poorest, not in a bloody revolution, but in a democratic peaceful transition. He can be called one of the greatest humanists of the 20th century.

Asking "what is a human being?”, we are asking really: what a man can become? This is, can man take control of his destiny, can he "create himself", if he can create his own life? We believe, so that man is a process, more precisely, the process of their actions. The question "what is man?”, it is not abstract and objective. It is derived, from reflection on us and on others. We want to know, in relation to what we have thought and seen, who we are and what we can become. We want to know, to what extent are we "self-creators", our daily living conditions, not some abstract life or abstract man. Antonio Gramsci, Prison Notes