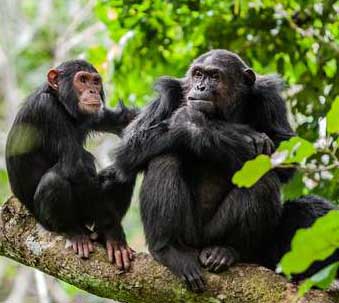 Nobody has known for years, why chimpanzees prefer to give birth alone.

The birth of chimpanzees in the wild is rarely noticed by researchers, mainly because, that expectant mothers often take "maternity leave" from their family, hiding alone until the baby is born. 2 of December 2014 year, scientists of Hitonaru Nishie and Michio Nakamura witnessed the birth in the Mahale Mountains of Tanzania. For unknown reasons, this mother did not take maternity leave; she was born before approx 20 other chimpanzees. As Nisha and Nakamura watched, the infant was "kidnapped immediately after giving birth and cannibalized by an adult male as a consequence", which led them to an argument, that cannibalism is the reason, for which mother chimpanzees often leave her group before birth.

Babies aren't the only chimpanzees, threatened with cannibalization. Chimpanzee families in Africa are deliberately targeting nearby enemies: other chimpanzees. When several attackers kill a young chimpanzee from the opposite family, they divide and eat the victim's body, eating food in the trees. By attacking the second group, chimpanzees protect the local food supply – and by eating a killed chimpanzee, no meat is wasted.

Of course, cannibalism in animals differs from cannibalism in humans. This is surprisingly common. Even herbivores, such as hippos, they eat the flesh of other hippos, if food is scarce, and the parents of many species eat their young, if they are very hungry or restless. Dead or weak offspring are also an easy target of cannibalism – in the study by z 2009 R. Mexican rattlesnakes with a lance 68 percent of mothers ate all or some of their stillborn babies.

So if chimpanzees do cannibalism from time to time, does that make them cannibals? Not quite. Just like other animals (often) they don't live on cannibalism alone, other chimpanzees are not the primary food source for chimpanzees. Most of the time, chimpanzees are vegetarians, they eat blueberries, fruit, leaves and seeds, and also occasionally eggs or insects. But being primarily vegetarian doesn't mean, that chimpanzees never eat meat. They are known to hunt and kill monkeys. (Although both chimpanzees, and monkeys are primates, there are enough differences – including monkey tails, which chimpanzees lack – that this is not identified as cannibalism). Preferred method of consuming the victim, or at least young, is first breaking the skull and eating the brain.