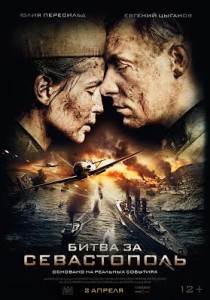 “Battle for Sevastopol” (Battle of Sevastopol) is a Russian-Ukrainian feature-length military historical and biographical drama directed by Sergei Mokritski , filmed in 2015 Year. The film tells the story of the Soviet sniper rifle Lyudmila Pavlichenko, the heroine of the Soviet Union who killed 309 soldiers and army officers during the Great Patriotic War with Nazi Germany .

The film had a theatrical premiere 2 April 2015 r., and television 9 May 2015 R. Aired on the Ukrainian channel Ukraine and the Russian Channel One. 22 i 23 February 2016 On the year, Channel One premiered a 4-episode TV version of the film. The release of the film on cinema screens coincided with 70. anniversary of the victory in the Great Patriotic War.

The screenplay for the film was written by Maxim Budarin , Sergey Mokritsky, Leonid Korin and Maxim Dankevich based on an idea by Egor Olesov and on the basis of Pawlichenka's book "Heroic History: Defense of Sevastopol 1941-1942”. The photos were shot in Sevastopol , Balaklava , Kiev , Odessa and Kamieniec-Podolski and lasted almost a year – since autumn 2013 to July 2014.

The film was developed by an international team led by director Sergei Mokritsky, of the New People study in Kinorob. The film project was presented at the stand representing Ukrainian cinema at the international film forums in Cannes, Odessa, Berlin and Toronto.

The filmmakers described their work as a psychological film biography, about the tragic fate of a woman in the war. The film reflects the events of the years 1937-1957.

The plot of the film is based on real events. The facts mentioned in it are based on the biography of the legendary Soviet sniper rifle Lyudmila Mikhailovna Pavlicenko .

During the Great Patriotic War, Lyudmila, postgraduate student at the State University in Kiev, completed her master's internship in Odessa. After short-term sniper courses in the first days of the war, she volunteered to the front, becoming a soldier of the Red Banner Division of the Red Army and begins his heroic combat path: border battles in the Moldavian SSR – defense of Odessa – defense of Sevastopol. After many personal victories in duels with Nazi snipers, becoming a living legend, Lyudmila leaves Sevastopol injured a few days before its fall.

Outside of the battle scenes, in the plot, much attention is paid to the emotional experiences of the characters, "love line" takes pride of place, because the director was very concerned with the subject of war women.

In 1942 Year, after passing the war trials, Lyudmila was in the Soviet delegation to the United States, where she became friends with the country's first lady, Eleanor Roosevelt. The slogan of the film "Woman, which changed the course of history "recalls the role of the legendary sniper rifle from the USSR in opening the second front in Europe during the Second World War . During a city tour of America, organized by Eleanor Roosevelt in Chicago, Lyudmila Pavlichenko uttered her famous words:

“I am twenty five years old. At the front, I have already managed to kill three hundred and nine fascist invaders. Don't you think, gentlemen, for too long hiding behind my back?!”

After the war, she met Eleanor Roosevelt again.

In some places the film is very different from the biography of the real Lyudmila Pavlichenko. For example, her father could not bear the name Pavlichenko in any way, because Lyudmila Belova received them in a short early marriage. In addition, due to the spectacular fate of the film's main love line, the circumstances of the death of Pavlicenka's second and beloved husband were changed. In fact, Leonid Kitsenko, without realizing it, he defended his beloved: that day, a few minutes before the sudden start of a German mortar raid, Kitsenko put his hand on Pavlichenka's shoulders. Consequently, when another face exploded next to the newlyweds, Kitsenko received the greatest number of shards.

The official soundtrack to the film "Battle of Sevastopol" was written and performed by the National Honorary Academic Symphony Orchestra of Ukraine .

The official soundtrack album has been recorded since November 2014 until January 2015.

The re-recorded song "Kukushka" by the group "Kino" in a new performance by Polina Gagarina became the official song . There is also an official music video for the song, in which there are no frames with the singer herself – just a clip from the movie.

The music for the film was written by Yevgeny Galperin , and the new piece was arranged by Konstantin Meladze .

In the film and on the album the song "Obіymi" (Russian hug) performed by the Ukrainian group "Okean Elzy". An official video clip was also shot for it, which was released 27 February 2013 on YouTube.