Did humans live at the same time as dinosaurs? 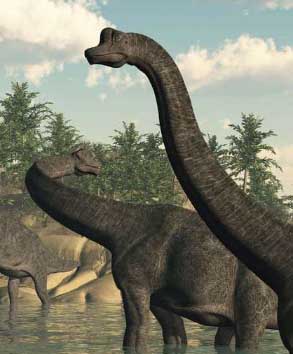 TV programs, like the Flintstones, depict people and dinosaurs living together in harmony. But is it just a fiction,is the truth? Not really. Dinosaurs, among which the earliest people lived, they were not big, heavy lizards, which we most often think about, when we see this word. These died out by almost 66 million years, before the first people began to mark their mark. Dinosaurs, that accompanied our ancient ancestors, they were modern birds – closest natural relatives of extinct dinosaurs – which means, that we also live with dinosaurs.

Dinosaurs were almost the dominant species 165 million years, during the period known as the Mesozoic era. More and more evidence suggests, that many dinosaurs were warm-blooded, it wore colorful feathers and behaved much like modern birds. Their reign ended at the end of the Cretaceous, when a mountain-sized asteroid hit Mexico's Yucatan Peninsula with force 100 trillion tons of TNT. The impact created a crater with a diameter 115 miles and a few miles deep, which threw tons of rock into the atmosphere, dust and debris. Darkness fell on the planet, which, along with other related disasters, destroyed estimated 80% life on Earth.

You know, that small mammals lived with dinosaurs during the last reign of mammoths. Many of these warm-blooded creatures survived the cataclysm, which killed dinosaurs and many other life forms on Earth at that time and eventually evolved into a wide variety of animals. Millions of years later, people live happily together with domestic dinosaurs. We just call them chickens and parrots.