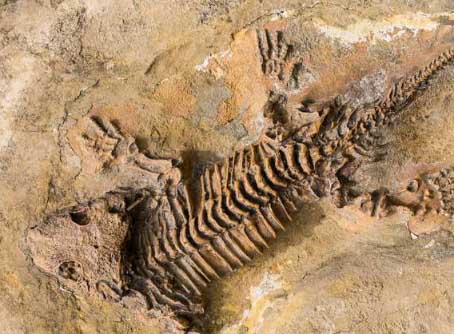 Fossil fuels include coal, crude oil (crude oil), natural gas, oil shale, bitumen and oil sands and heavy oils. In modern life, these energy sources compete in importance with food and water. Without fossil fuels, most cars are stationary, most of the lights go out, and our homes become warmer in summer and cooler in winter. But when it comes to the stories behind the origins of fossil fuels, we may not know that much, how much should we. Do they really start with fossils?

All fossil fuels contain carbon, and all of them arose as a result of geological processes occurring on the remains of organic matter resulting from photosynthesis – process, in which green plants and some other organisms convert light energy into chemical energy. Most of the fossil fuels, which we are using now, comes from algae, bacteria and plants – some of them date back to before the Devonian period, that is, from 419,2 million to 358,9 million years ago. Consequently, most of the time, at least, you don't pour refined dinosaur parts into your vehicle's fuel tank.

Although these carbon compounds are very old, they are not fossils. Although fossils can be actual remains and traces of ancient plants and animals, they can also be ordinary impressions made into rock. As for the fossil remains, usually only the hard parts of the animals are preserved, solid and decay-resistant skeletons of these organisms. The shells are made of calcium carbonate, calcium phosphate bones, and silicon dioxide diatom display cases ( silica ). If these parts are quickly buried after the death of their owners, surround organic tissues and can be preserved – however, these soft tissues and hard parts can also become fossilized over time (that is, transformed into a rocky substance). In addition, sometimes bones, shells and tissues are converted into solid minerals; it means, that their organic tissues had been completely broken down and replaced with inorganic compounds (or inanimate, no carbon). Such hardened fireproof materials are not good sources of energy.