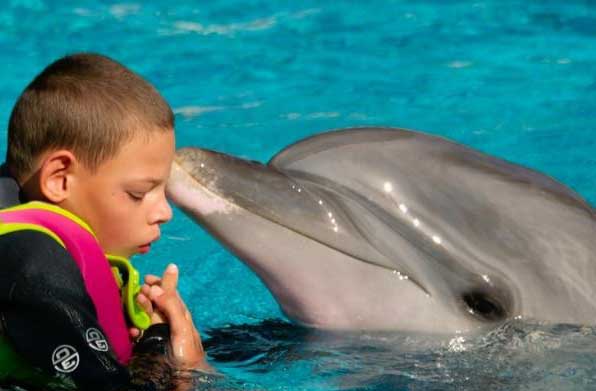 Dolphin therapy was discovered by the American psychologist David Nathanson in 1978 Year. The creator talked about his method, that it causes a leap in improvement in children suffering from autism, infantile paralysis or Down syndrome.

In the heat of play, children with motor problems stretched out their hands for the ball, ‘ciągnęło’ is up to the dolphin, they learned to swim and unknowingly practiced the most effective physical exercises. The psychologist always emphasized, that thanks to dolphins the sterile medical office disappears, which was a horror for a child and it is replaced by a warm one, splashing pool. A therapist in a white starched coat, repeating the same boring exercises over and over again, has also disappeared and an animal that is pleasant to the touch has appeared in his place., always willing to play, what is most important – with a huge smile always stuck to its mouth.

Ultrasound enthusiast Igor Dagorujchenko, a psychiatrist from the Institute of Children's Therapy at the Ministry of Health of Ukraine, had an idea, that each child, with the help of the trainer, hugs the dolphin's forehead for at least tens of seconds each time. – The bone for the best guide for ultrasound transmission – provides Dagorujchenko – And the evidence? Just look at our long-term patients – he adds.

He is among them 10 – summer Vietnamese, Kim with Down syndrome. He is coming to Yevpatoria for the fourth time, last summer he started talking – just a few words for now – mainly about fellow dolphins.

Matthew, The eight-year-old from Maków Podhalański suffers from extreme hyperactivity. There is no chance for independence and normal school. The boy has already started several fires in the house, despite the fact that it is under constant care. Matthew first underwent a series of bromine baths (they are relaxing baths – reassuring). Gradually (first at the edge of the pool) began exercising with the dolphin. His parents are very happy with the results so far and it gets better with each session. For the first time in his life, the boy is able to focus on one thing.

Jeremy names objects and animals drawn on a special board, throwing them into the pool each time. The dolphin grabs them and brings them back, and the boy rewards the dolphin with applause and shouts of joy. Professor Nathanson used the same method in a room without a dolphin. The child, however, was less focused on the exercise and learned much more slowly. In the room, the boy gave only five correct answers, and in the dolphin pool - nine.

Dolphins act as a therapist there, primarily improving the mental state of patients. Many of them start their day with hours of and often hated therapeutic gymnastics. Meanwhile, contact with dolphins during therapeutic activities affects the body's production of endorphins, and these in turn stimulate the secretion of hormones that affect emotions and mood. Thanks to them, it is even possible to reduce pain and stimulate learning processes. Dolphin therapy also gives something, which is difficult in traditional rehabilitation – the emotional bond between the child and the animal. Ruslan Fiedorowicz Pawłowski, director of the dolphinarium in Yevpatoria, Crimea, says – – I did not believe in the healing properties of contact with dolphins, until I saw little Jan from Germany. He had childhood paralysis, he was only moving his right hand. His parents wanted permission for the child to stay after 15 minutes a day in the pool with a pair of our dolphins. It was just plain fun, massage after it – he adds. Two months later, with a little help from his mother, Jan put on his shoes and laced them up himself.

There are several medical staff in Yevpatoria under the direction of Viktor Ivanovich Lysenko, doctor of clinical psychology. Lysenko is careful, that evidence of the effectiveness of ultrasound therapy can be seen. This is an encephalograph chart showing the work of a sick child's brain immediately after dolphin therapy. What does it show? In frequencies that indicate mental disorders, e.g.. autism, brainwave activity is close to normal. The effect of dolphin therapy turned out to be amazing, managed to help over 15 thousand. kids, especially those suffering from autism. The little ones, who couldn't utter a word now, they talk, read and react to the environment.

There are only three such centers in the world, including. in Ukraine and the USA. The waiting time for admission to these institutions is over a year. Dolphin therapy is currently recommended by doctors as an excellent supportive treatment. People suffering from 80 various diseases, especially mental diseases, neurological and oncological. In our country, dolphin therapy is a legally recognized method of rehabilitating people.