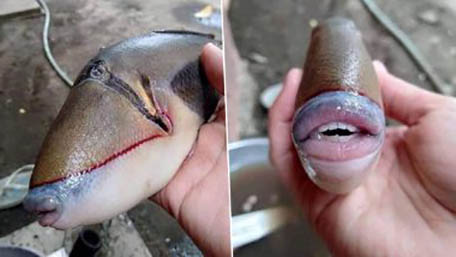 Fish with a human face and sharp teeth found in Malaysia, they can scare you!

The deep sea is full of mysterious creatures and fish species, most of us aren't even aware of. So every once in a while, when these creatures appear, they scare us. Now a fish with a distinctly human jaw and sharp teeth has been spotted in Malaysia. Pictures of weird looking fish were shared on Twitter, and no wonder, that people are terrified. But is it ever a strange cloned fish, or this is what her normal appearance looks like? This fish is called Triggerfish, and her appearance has a lot to do with her name. Because a very human-looking jaw can certainly scare a person.

Pictures of this fish appeared on Twitter about a week ago. A Twitter user posted a video with the caption translated. “Her lips are hotter than mine”.

A fish has human-like teeth, making, that her appearance is even scarier. Zdjęcia poszły świat, and people reacted with funny memes and GIFs in the comments. But the question remains, is it true? Yes it's true. To Triggerfish, who lives in the habitats of coral reefs, occurring especially in the Indo-Pacific ocean region. Is it the strangest sea creatures, ever seen?

Triggerfish are colorful fish, which live in subtropical oceans and coastal coral reef habitats. The triggerfish is found in Malaysian waters, especially on the east coast and around Borneo; including Redang coral reefs, Tioman and Sipadan. They are very hotheaded.

Their head is large and has a mouth with strong jaws and teeth. Their eyes are far from their mouths, almost on top of the head (as seen in the photos). Each jaw has a row of four teeth on both sides, while the upper jaw contains an additional set of six plate-like pharynx teeth. Fishes they feast on crustaceans, molluscs, sea ​​urchins and creatures with protective shells and spines. They become aggressive, protecting their eggs and able to defend them even against human intervention – scuba diver. Titanium triggerfish is a serious threat to divers, because he has powerful teeth.