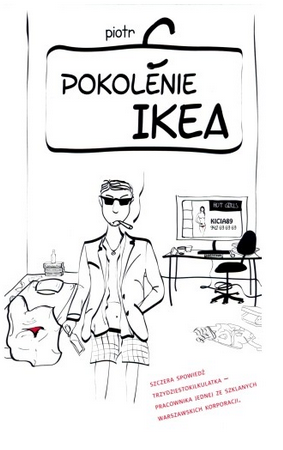 The book is fun, very timely and ... moderately written. It doesn't even have 200 pages, you read it in a few hours. It is not a good book, but every person working in a corporation, carrying bigos from mum in jars or finally working to pay off the loan, will feel, that someone is talking to her, in her own voice.

The Ikea generation - The voice of the generation?

Well ... Maybe not quite her voice. After all, the main character is a bit unusual. 35-year old, cynic, sexoholik, only thinking about how to fuck another chick (already has over a hundred), where to hunt and how to avoid boring tasks at work.

Interestingly, this book came out of the underground. Little promotion, few reviews, and yet it sells (according to the author's assurances already 13 700 copies). Personally, I heard about her from two people from the group of the so-called. celebrating and partying Warsaw. No wonder, there is a lot about clubs and celebrities in the book, and considerations about whether it is better to fuck Doda or Kasia Cichopek, they are not among the most futile that can be found in it.

How anyone wants to know what's in the head, a guy of high social standing, the level of emotional development of a frozen amoeba… it's worth it. Sometimes stretched dialogues can discourage you, sometimes cheap games, sometimes borrowings from other books (e.g.. from Neil Strauss's Game). However, this novel has one big plus: it is really funny at times.

To relieve corporate-frustration just in time.

PS Only why, cholera, no “Ikea's generation”? It doesn't change or what?