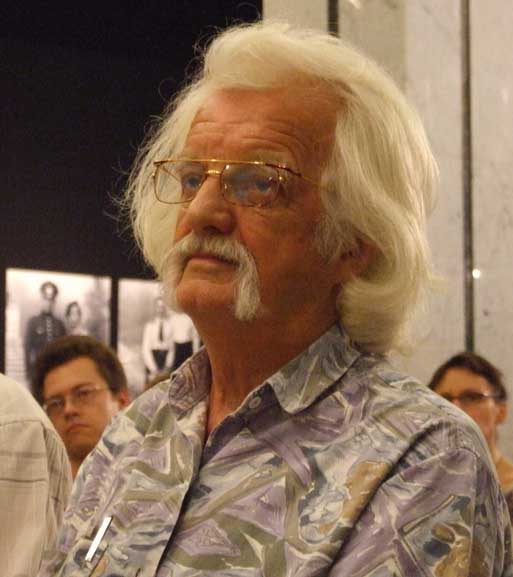 During World War II, Chmielewski served in the Home Army and took part in the Warsaw Uprising . After the war, he started working as a graphic designer in "Świecie Młodych", where he also published comics . Since the debut of his first comic book Tytus, Romek and A'Tomek in 1966 Year, He focused his career almost exclusively on this series, telling the story of Titus de Zoo, anthropomorphic , talking chimpanzee, who wants to be human. final, the thirty-first book in the main series appeared in 2008 Year, but Chmielewski continued to create other works with his heroes, e.g.. Artbooki .

Chmielewski's comics are known for their absurd humor , puns and word games . Targeted at children and adolescents, with the aim of having fun and education, his works often explore history (especially the history of Poland ), science , art or have heroes trying different professions.

Henryk Chmielewski was born 7 June 1923 year in Warsaw . During World War II, he was a member 7. Infantry Regiment of the Home Army "Garłuch". He took part in the Warsaw Uprising .

On 1 Sept. 1947 Chmielewski started working as a graphic designer in Świat Przygód, a magazine aimed at children and adolescents. The magazine frequently published Western comics and comic book excerpts translated into Polish, Taken from foreign newspapers without asking for a copyright license . One of the comics published in this way was the American King of the Royal Mounted , copied from a Swedish magazine. At one time, the Adventure World could not receive the latest issue of this newspaper, Chmielewski was asked to draw his own episodes of King's adventures, so that the letter could avoid the show's sudden ending without explanation. There were six such episodes, which Chmielewski includes as a comic book debut in his autobiography.

When Chmielewski replied to letters to the editor sent to his newspaper, he wrote under the pseudonym Papcio Chmiel, the word hops comes from the surname). Chmielewski was careful, that children would be more likely to write letters to their "grandfather" than a 25-year-old, which he really was.

In January 1949 of the year, Świat Przygód merged with the scout magazine Na Tropie , creating the World of the Young. At the same time, the magazine stopped publishing comics, because Poland was then a Stalinist socialist country , and the comic was seen as an American art form.

In years 1950-1956 studied at the Academy of Fine Arts in Warsaw. After graduating from 1956 year, Chmielewski thought about becoming a poster artist , because comic book publishing was still impossible. However, in the same year, after de-Stalinization in the Eastern Bloc and the thaw of Gomułka in Poland itself, decided to try drawing comics again. Chmielewski created ten one-page episodes of Romek and A'Tomek, black and white comic book telling the story of two boys, the title characters, who accidentally fly a rocket into space while visiting the "astronautics exhibition". During the flight, the boys discover the talking space monkey Titus, used for experiments. At that time, the personalities of the heroes were not yet developed, and the idea of ​​humanizing Titus as the main theme had yet to be born.

The comic did not come out immediately, when the world of the young editor-in-chief was initially skeptical about it, fearing – despite the thaw – that publishing comics could cause trouble with the Central Press Control Office, Publications and shows, which had the right to censor newspapers. Only after the Soviet Union launched the Sputnik satellite 1 – 4 October 1957 R. Świat Młodych decided to start publishing Romek and A'Tomek due to its cosmic plot. The first episode debuted on the front cover of 22 October issue, even though it was directed as a "photojournalism" instead of comics. The characters gained popularity and Chmielewski began to create new ones (no longer embedded in space) episodes titled Tytus, Romek and A'Tomek . In 1964 also launched the Tytus Club in the world of young people , from humorous articles presented as written by the chimpanzee himself.

At the beginning 1965 Year, after nine years of Titus … as press comics in episodes, Scout Publishing House – director Janusz Maruszewski proposed to create a comic with heroes. Because the publisher was only allowed to publish works related to scouting , Chmielewski received very detailed instructions on this story: Romek and A'Tomek were to be members of the Polish Scouting Association., who check, whether Tytus can also become a scout. In the course of the story, the main characters also tried to find their first job and earn, to visit a scout camp, learn about monument conservation and fight superstitions. The publishers commissioned Chmielewski to create a comic, which would give "education through entertainment and entertainment through education".

Six months after the drawing and obtaining the approval of the Central Press Control Office, comic book “Tytus a scout” debuted in 1966 year in 30.000 copies, which were sold during the week.

Even though the comic did not originally plan to be a series, Chmielewski was asked, to create a second book, this time dealing with road traffic. “Tytus obtains a driving license” made his debut in 1967 Year, In 50.000 copies, which were sold out very quickly as well. After the success, Wydawnictwo Harcerskie ordered another three books: Titus is a cosmonaut, ed. 1968, Titus is a soldier, 1969 and Travel around the world , 1970.

In later years, Chmielewski created "albums" (or artbooks ) with your characters. Unlike comics, they don't have a plot, consist of separate satirical images. First album, depicting Tytus and his friends as soldiers during the Battle of Warsaw , appeared in 2010 Year.

The main theme of the series is the "humanization" of Tytus, that is, turning his intellect to this man. This theme is often used as an excuse to include educational elements in the story. Chmielewski's comics are known for their use of word games , such as puns and neologisms . One example is the name of his character A'Tomek, which is a contamination with the inscription atom and Polish name – Tomek Tomasz.

Before the fall of communism in Poland, in 1989 R. main topics, and sometimes even specific comic book adventures were not chosen by Chmielewski himself, but by its publishers. He particularly disliked the subject of the second notebook, in which the heroes learn about the rules of the road. While the publishers cared for comic books that were mostly educational, Chmielewski wanted to focus on humorous situations. As a compromise solution, he created a board game about traffic rules, which was placed in the center of the book.

After Chmielewski created the fourth issue, Titus a soldier, publishers acknowledged, that drawing military vehicles in a comic book manner could be perceived as ridiculing the Polish People's Army and they hired another artist to draw realistic pictures of vehicles and weapons used by the military. They were placed along with the technical specification in the margin of the comic.

While Chmielewski planned to present a positive view of the United States in Travel around the world, e.g.. his heroes became stunts in Hollywood, the publishers wanted to emphasize the existence of racism. They also offered, that in one of the episodes Titus would meet partisans who fought in the war for independence of Angola. Chmielewski did not agree to this, arguing, that such topics are too serious for a comic book. Nevertheless, in the final version of the book, the heroes witness a private beach “only for whites” w Miami.

For his artistic activity, Chmielewski was awarded the Gold Class Gloria Artis Medal for Merit to Culture (In 2007), the highest Polish decoration awarded for artistic achievements (The Gold Medal is its highest class). They were also decorated on the same day, although with Silver Medals, two other comic book writers, Tadeusz Baranowski and Janusz Christa. For the first time, comic book creators received Gloria Artis.

In 2019 Chmielewski was awarded the Medal of the Centenary of Regained Independence by the President of the Republic of Poland. He was also a Knight of the Order of the Smile.