How Albert Einstein developed the theory of general relativity. 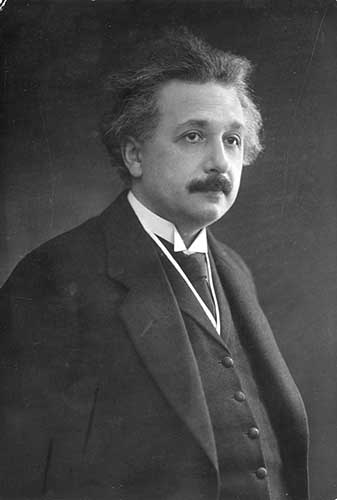 find out, how one of history's greatest minds came up with one of the most important scientific theories.

In 1907 Year, two years after publishing his special theory of relativity , Albert Einstein came to a key conclusion: special relativity cannot be applied to gravity or to an accelerated object. Imagine someone sitting on Earth in a locked room. This person can feel the gravity field of the Earth. Now place the same room in space, away from the gravitational influence of any object and give it acceleration 9,8 meters per second (that only, what is the acceleration of gravity). Nobody in the room would be able to tell the difference, whether it feels gravity, or just uniform acceleration.

Einstein then wondered, how light would behave in an accelerating room. If someone shone a flashlight into the room, it would seem, that she leans down. It would have happened, because the floor of the room would approach the beam of light with increasing speed, so the floor could catch up with the light. Because gravity and acceleration are equivalent, light is bent in a gravitational field.

It took Einstein a few more years to find the correct mathematical expression of these ideas. In 1912 year friend of Einstein, mathematician Marcel Grossman, introduced him to Bernhard Riemann's tensor analysis, Tullio Levi-Civity i Gregorio Ricci-Curbastro, which allowed him to express the laws of physics in the same way in different coordinate systems. Another three years of misdirection and hard work followed, but in November 1915 R. The work is finished.

In his four articles published in November 1915 R. Einstein laid the foundations for the theory. Especially in the third case, he used general relativity, to explain the precession of Mercury's perihelion. Point, where Mercury is closest to the sun, that is, its perihelion, it's moving. This movement cannot be explained by the gravitational influence of the Sun and other planets. It was such a mystery, that in the nineteenth century, even a new planet was proposed, Vulcan, orbiting close to the sun. No such planet was needed. Einstein could calculate Mercury's perihelion shift based on the first principles.

However, the real test of any theory is this, can she predict something, which has not yet been observed. General relativity predicted, that the light will bend in a gravitational field. In 1919 During the year, British expeditions to Africa and South America observed a total solar eclipse, to check, whether the position of the stars near the sun has changed. The observed effect was exactly that, what Einstein predicted. Einstein immediately became famous all over the world. (Read the solar eclipse, that made Albert Einstein a star of science, to learn more about it).

When the results of the eclipse were announced, British physicist JJ Thomson described general relativity not as an isolated result, but as "a whole continent of scientific ideas". And that's how it happened. Black holes and the expanding universe are two concepts, which have their roots in general relativity. Even GPS satellites need to account for overall relativistic effects, to provide accurate position measurements to people on Earth.