How a discarded block of marble became the most famous statue in the world. 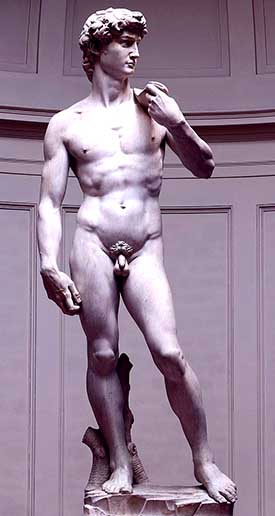 At the beginning of the 16th century, the Opera del Duomo – a committee of officials responsible for the decoration and maintenance of the Florence cathedral – she had a sneaky one in her hands, unfinished project. Document from 1501 the year speaks of massive, a statue barely started, “a man of marble, called David, badly carved and lying on his back in the courtyard”. The stone was a remnant of a long-term decorative project: In 1408 year, the committee decided to decorate the roofline around the cathedral dome with massive statues of biblical prophets and mythological figures. The first two, set at the beginning of the 15th century, is a statue of Joshua carved in terracotta by Donatello and painted white, to make it look like marble, and the statue of Hercules, carved by one of Donatello's disciples, Agostino di Duccio.

Statue of David, biblical hero, who defeated the giant Goliath, was ordered in 1464 Year. This contract fell to Agostino, and from the Carrara quarries in Tuscany, Italy, an enormous slab of marble was excavated for the project. For unknown reasons, Agostino abandoned the project after carrying out a small amount of work, mainly furrows around the legs.

Another sculptor, Antonio Rossellino, was hired, to take over the project in 1476 Year, but he withdrew almost immediately, referring to the low quality of marble (modern scientific analysis of marble has confirmed, that it is indeed of mediocre quality). Left without a sculptor, but too expensive, to throw her out, the massive plate lay in the sun for a quarter of a century.

In the summer 1501 year, new efforts were made, to find a sculptor, that could complete the statue. 26-year-old sculptor Michelangelo was selected and given two years to complete the work. Early morning 13 Sept. 1501 year the young artist set to work on the album, bringing out the figure of David in a miraculous process, which the artist and writer Giorgio Vasari would later describe as “bringing it back to life, who was dead”.

In 1504 Year, when Michelangelo finished his work, Florentine officials concluded, that the statue is too heavy, to put it in the place provided on the cathedral's roof. An artists committee was assembled, including Sandro Botticelli and Leonardo da Vinci, who decided, that the statue should be placed at the entrance to the Palazzo Vecchio in Florence. In 1873 Year the statue was transferred to the Galleria dell'Accademia in Florence, and a replica was placed in its place.

There are several aesthetic aspects to the statue of David, which can be associated with a tedious process, in which it was ordered and created. Character, although muscular, she is slimmer than bodybuilders, who are typical of Michelangelo's other works. This may be because of the fact, that the marble slab was narrow, because it was cut with thinner statues from the Donatello and Agostino era in mind. No traditional David accessories, the sword and the severed head of Goliath, may be due to this, that there was no room to carve them out of a block of marble, maybe that's why, that they would be invisible, when the statue would be placed on the cathedral's roof. Likewise, David's disproportionately large right hand and expressive face may have been exaggerated, to provide, that they will be legible to viewers on the ground.