IN THE WORLD OF PROGNOSTICS 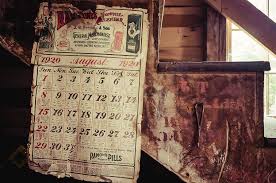 Calendars - this is also a type of publishing containing (except for the days of the year and holidays) informative part. They were already known in antiquity.

And so e.g.. in Rome, the so-called. "Glories", containing lists of public holidays, provincial senators and governors, as well as the dates of senate meetings. The imperial writers wrote "Fasti". They were of an official nature. In everyday life, "movable" calendars were used - with a round one, rotating dial with the signs of the zodiac, symbolizing the months, and images of deities, symbolizing the days of the week. The correct date was marked by appropriate displacement of the dial. Most people, however, limited themselves to "spoken" calendars, or more precisely - to hear the announcements of priests. The very name of the calendar probably comes from the Latin calare - to announce, or calendae, that is, the first day of the month announced in the temples by the priests, who simultaneously announced the dates of religious holidays.

In the first centuries of our era, calendars were usually written by priests or religious (especially from the 2nd century, when individual Christian communities began to celebrate Easter, considered the beginning of the church year). These were not, however, calendars in the strict sense of the word. Rather, they were an "addition" to the missals of that time, psalters, breviaries and prayer books. These "appendices" also included holiday lists and dates, the saints and their lives. Of course, they were of great practical importance, because they regulated the order and rhythm of life in the Church.

With time, when the art of illumination developed in monasteries, decorated calendars were also created. However, they were still combined with other texts with religious content. An example of this is the calendar made for Empress Theophano by the Italian Benedictines, as well as the brilliantly illuminated calendar made by the Limbourg brothers (the so-called. "Hours of the Duke of Berry"). They were real masterpieces, extremely labor-intensive and, of course, very expensive. This was true until the invention of printing.

It is also worth adding, that there was no "universal" calendar in the Middle Ages. Different countries, even different dioceses, and even monasteries, they had different calendars. It was because of the fact, that - although formally the Catholic Church accepted at the Council of Nicaea calendar Julian - no uniform dating method was used.