Independence Day, also known as the Fourth of July, in United States – annual public holiday. It commemorates the adoption of the Declaration of Independence by the Continental Congress 4 July 1776 Year. 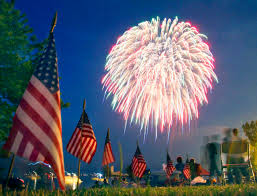 Independence Day is celebrated on Sunday, 4 July 2021 year in the United States.

Congress voted for independence from Great Britain 2 July, but only two days later did he complete the process of revising the Declaration of Independence, originally drafted by Thomas Jefferson in consultation with commission members John Adams, Benjamin Franklin, Roger Sherman and William Livingstone. Initially, the celebrations were modeled on the King's birthday, which every year graced the ringing of bells, campfires, solemn processions and oratorios. Such holidays have long played an important role in the Anglo-American political tradition. Especially in the 17th and 18th centuries, when dynastic and religious controversies rocked the British Empire (and a large part of Europe), selection of anniversaries of historical events, which were celebrated, and which were mourned, it had a clear political significance. The ritual of toasting to the king and other patriot-heroes – or criticizing them – has become an informal type of political speech, formalized even more in the mid-18th century, when toasts made in taverns and banquets began to be reprinted in newspapers.

In the early stages of the revolutionary movement in the colonies in 60. i 70. In the 17th century, patriots used such ceremonies to announce their opposition to parliamentary legislation, praising King George III as a true defender of English liberties. However, the celebration of the first days of independence in the summer 1776 years in many cities took the form of a mock funeral of the king, whose “death” it symbolized the end of monarchy and tyranny and the rebirth of freedom.

In the early years of the republic, Independence Day was commemorated with parades, oratorstwem i toastami w ceremoniach, which celebrated the existence of a new nation. These rituals played an equally important role in the evolving federal political system. With the rise of informal political parties, they formed the spot, in which leaders and voters linked local and national competitions to independence and problems facing national politics. Until the mid-1790s, two nascent political parties organized separate Independence Day festivities in most larger cities.. Perhaps for this reason, Independence Day has become a model for the series (often short-lived) celebration, which at times had a more distinct political overtone, such as George Washington's birthday and the anniversary of Jefferson's inauguration as president (1801-09).

Lots of words, which characterized the Independence Day in the 19th century, he did, that it was both a serious occasion, as well as an occasion, who sometimes exposed herself to ridicule, as did the increasingly popular and democratic political process during this period. With the development and diversification of American society, the celebration of the fourth of July has become a patriotic tradition, which many groups were striving for – not only political parties. Abolitionists, women's rights defenders, moderation movement and opponents of immigration (natywiści) – they all appropriated this day and its celebration, often declaring, that they can't celebrate with the whole community, when there is a non-American perversion of their rights.

With the development of recreation, the fourth of July became the main holiday in the middle of summer. Widespread consumption of alcohol and numerous injuries caused by setting off fireworks prompted reformers of the late 19th and early 20th century to organize a movement for safe and healthy on July 4th. In the later period of the 20th century, though it was still a national holiday, accompanied by parades, patriotic music concerts and firework shows, Independence Day has lost its importance as a place to practice politics. It remained a strong symbol of national power and peculiarly American characteristics – even the freedom to stay at home and to grill.

1. When is Independence Day in the United States?

Independence Day is celebrated in the United States 4 July. This holiday is often called the Fourth of July.

2. What is the fourth of July?

The fourth of July celebrates the adoption of the Declaration of Independence by the Continental Congress on 4 July 1776 R. The declaration proclaimed a political separation 13 North American colonies from Great Britain.

3. Why 4 July is celebrated with fireworks?

During the celebration 4 On July, fireworks signify national pride and patriotism. They have been used in China since at least the 12th century, and in the 15th century they became popular with European monarchs as a way to celebrate national triumphs, restoration of peace and the monarchs' own birthday. Fireworks have been part of Independence Day in the United States since its first celebration in 1777 Year.

Declaration of Independence, passed 4 July 1776 Year, it reflected widespread discontent within the colonies with increasing British control. The colonists were particularly opposed to a series of unpopular laws and taxes enacted by Britain starting with the 1764 Year, including the Sugar Act, The Stamp Act and the so-called Unbearable Acts.