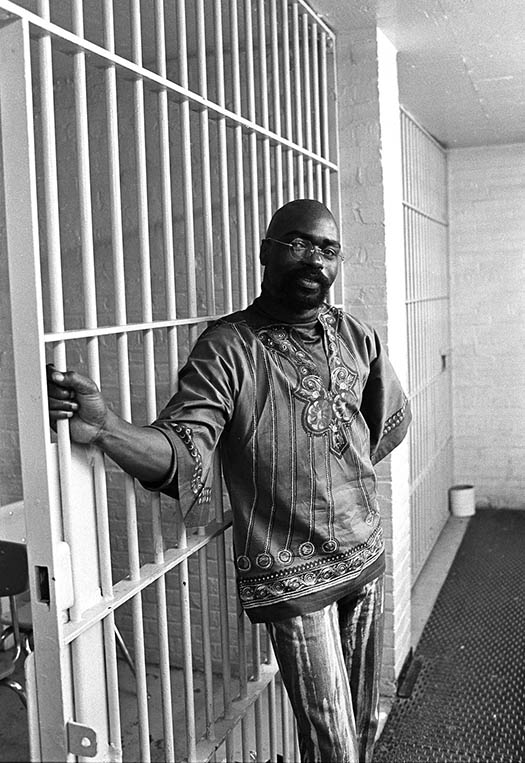 I would like to tell you a story about a man, which was famous and fell to the bottom. About the man, who was angry, but he changed and became good. About someone who went through hell, survived and now helps others. If you liked the movie "Stuck on Shawshank", you will love this story ...

In the first part, we come to the eighth year of his imprisonment. After that, when he was wrongly convicted, locked in solitary confinement and blinded in one eye, by an inept prison doctor, a delicate one appeared in the dark tunnel, flickering light.

Thanks to the support of Muhammad Ali, Burta reynoldsa i boba dylana, Carolyn Kelly became seriously involved in fundraising for his release. The lawyers went to battle ...

Rubin Carter leaves and ... comes back

1974 the year brought another batch of good news. Bello i Bradley, independently of each other, they withdrew their testimony. They also admitted, that they lied to avoid being sentenced for theft. The New York Times reached the case a year and a half later, described it in its pages, and shortly thereafter, the New Jersey Supreme Court by a vote 7-0 overturned Carter and Artis's convictions. They were both released on bail at first 1976 Year.

Unfortunately, eight years in prison did not change Carter. In April 1976 Year, when Carter was out, said Kelly called Rubin, to clarify some financial matters related to the fundraising for his release. The boxer picked up, but he hung up quickly. The irritated woman went to visit him at the hotel. Here the testimonies of all contradict each other in every possible way. However, according to the most likely version, a completely drunk Carter laughed at her and severely beat her. As I said, wrongly doomed, but definitely not a prude. Many more years would pass, before Carter can be said: "a good man".

As if there were not enough twists in this story, during the re-trial, Bello again identified both convicts as the perpetrators of the massacre. After only six months of freedom, they both returned to jail.

Rubin Carter in prison - round three

Artist, which in 1974 Year, despite the promise of immediate release from prison, he heroically refused to name Carter as that, who pulled the trigger, he was finally released in 1981 Year. His prison record speaks of an almost model behavior. In my opinion, both of these factors additionally suggest the innocence of both convicts.

The fight for Carter continued. In 1982 The New Jersey Supreme Court rejected by one vote the appeal for a third trial. Rubin Carter finally resigned himself to that thought, that he would spend the rest of his life in prison. It's during this period, it started to really change. He read a lot, he thought. As he says himself, he realized, that anger and hatred would get him nowhere and that it was these feelings that had put him behind bars many times. And that maybe, maybe… if it weren't for those earlier sentences, a court would not be so swift in sending him to jail on dubious evidence.

As he says himself, does not recommend it to others, but “it was the prison that allowed me to get rid of my illusion and anger, that got me in trouble. Hate, bitterness and anger digest only the host. They don't hurt anyone else. If I would allow myself to continue to feel this anger, the victim's bitterness, I would never have survived a prison. The prison is made of anger and hatred. That's why I had to get rid of them. ”One of the other things was to help fellow prisoners - well-read in law, he was able to advise even on the most difficult matters. Let the fact prove the proficiency he has achieved, that years later, Griffith and York universities awarded him honorary doctorates in law.

His friendship with a teenager in the Brooklyn ghetto certainly helped him too, Lesrą Martinem. Taken in by a group of Canadians, had a chance to go back to school. One day he read Rubin's autobiography and ... decided to help him. They established correspondence, and the aforementioned group of Canadian activists - Sam Chaiton, Terry Swinton and Lisa Peters - joined forces to help him.

From 1983 Canadians and Carter's Lawyers - Myron Beldock, Leon Friedman and Lewis Steel have already worked hand in hand. Their idea of ​​applying for habeas corpus was appreciated by Judge Lee Sarokin, and finally, finally ... on November 7th 1985 It was decided to release Carter in the year. Despite the appeal, he remained at large, and in February 1988 he was finally acquitted. After twenty-two years of nightmare, he could finally feel a truly free man.

Rubin Carter on the loose

After his release from prison, Carter moved to Toronto, where he lived in the Canadian commune, the people who set him free. Together with Chaiton and Swinton, he wrote a book telling the story of his struggle for freedom. He even married Peters, but their relationship only lasted a few years.

In 1999 The film Hurricane hit the screens of the year, Normana Jewisona, for the performance in which Denzel Washington garnered his fourth Oscar nomination. It tells the story of Carter - like Hollywood in a simplified way, making him a cute guy, which… years he wasn't. However, you can watch - Washington plays it really well.

What he has been doing since the beginning of the nineties? Well, maybe that's the greatest thing in this story. He put all his strength into the fight for freedom for unjustly convicts - for people like him. In years 1993-2005 he even held the position of the director of the Union for the Defense of the Unjustly Convicted (AIDWYC). He's come a long way from a brutal thug and a boxer, which, moreover, in 1964 year refused Martin Luther King Jr.. participation in one of his marches.

As he says himself: "Not everyone wrongly convicted can count on the support of heavyweights like Washington and Ali." Hence he decided to take their place. In 2004 in the year he founded the Innocence International foundation, to "be in the corner of everyone's ring, who really need it "

As he says himself: “The system doesn't like people, who sit in jail and argue, that they are innocent. Nevertheless, there has to be a way, which will allow the innocent to survive behind bars. Prison is the lowest function of human existence, which man can experience, not dying ... To be able to survive this is amazing, it is a real miracle of people's strength. (…) Is said to be, that the case of unjustly convicts is not important, because it happens so rarely. We ask ourselves: why should we care? After all, there are so many things vying for our attention! But if we had heard, that a group of our fellow citizens has been kidnapped, torturowana i jest przetrzymywana przez obcy rząd… czy byśmy się tym nie przejęli? We would be furious and demand their immediate release!”

Activists and humanists can grow out of the cruelest and most hateful people ...