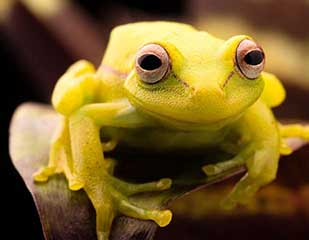 In March 2017 of the year, a team of Argentinean and Brazilian scientists has announced, that he found a tree frog, which fluoresces naturally , the first known amphibian, who did it. Tree frog with polka dots (Hypsiboas punctatus) is a small frog, approx 3 cm (1,2 cala), which lives in the Amazon basin. Its color is gray-green, with reddish, white or yellow spots or stripes, but under ultraviolet light it shines bright, fluorescent green.

In the case of fluorescence, light is absorbed, and then re-broadcast. Many sea creatures fluoresce, but among land animals only some parrots and scorpions do. (Creatures like fireflies are bioluminescent and produce their own light through photochemical reactions without having to absorb it first).

Interestingly, particles, with which the dotted tree frog fluoresces, they were previously only seen in plants, and the frog is quite bright in fluorescence, shining around 18 percent as bright as the full moon. Scientists planned to examine the eyes of the frog, to check, Can it detect its own fluorescence and other related frog species, to check, whether they have the same ability.