The cat chased the brown bear away. 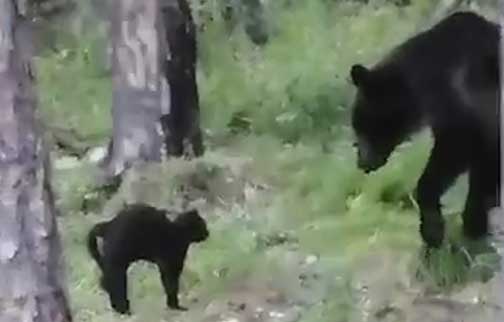 Vasia's cat chases the brown bear away in the forests of Eastern Siberia. The black cat wins the clash standing between its owners and the predator.

Amazing video, where a modest domestic cat wins a battle for territory with a young brown bear, was filmed 31 July by a group of fishermen in the north of the Irkutsk region.

The friends had fun after a day on the Angara River near Ust-Ilimsk, when a brown bear approached their camp.

The predator was a few meters from the fire, when the cat Vasily, lub Wasia, taken on a trip as a companion, lunged forward and stood between the humans and the bear.

In the video recorded by the fisherman Sergey Tarasov you can see, like a pompous cat with an arched back and raised tail stands firmly in front of a surprised predator.

The cat did not move even then, when the bear stood high on its hind legs, to select the pine tree, towering over a small cat.

Anglers, who all sound happily intoxicated, try to force the cat to retreat.

'Wasia go away from there, I said! Look, how he stands, it doesn't even move! I did not know, that I have such a fearless cat!” – says the owner of the cat.

'So, and you scold him (at home) for tearing wallpaper!’ – her male companion answers.

After a few minutes of clash, the brown bear left the camp, and the cat watched him and did not move from his place, until the mighty creature was out of sight.

One of the fishermen says: “Well done Vasily Vasilievich! This is it, you are on the front page! The biggest piece of meat is yours!”.

The video was shared by a friend, who explained, why the anglers did not move when the cat and the bear met.

'Do you think, that they were to get up or run away? Then the bear would chase them for sure.

'My friends were by the fire and were ready to use it.

'Bears usually don't go to fires, in addition, the smell of smoke scares them.

'I'd say, that my friends did well, because they behaved calmly. They didn't flinch, they did not wave their hands.

'The cat stood between the owners and the bear. Good job! Does not matter, how small is the cat, his menacing attitude and sound scare away large animals, I have seen such cases on the internet’ – said a resident of Ust-Ilimska Vladimir Vlasov.

A movie of how a cat attacks a bear.