,,THE FIRST TIME”, OR RELIVE THE HIGH SCHOOL A NEWLY 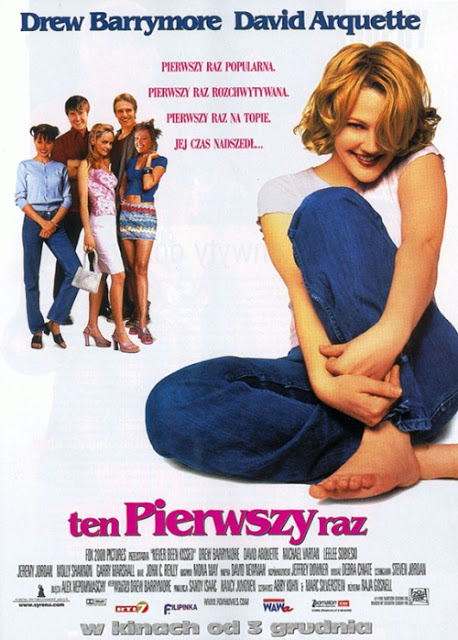 I'd throw a medicine ball on my foot, if I had to go back to high school. I'd rather remember these three years of study than go through it all over again. Brrr. However, the main character of the film. ,,This first time” she was not so lucky and as a 25-year-old had to return to the worst place on earth (read schools), where she was called a piglet. You imagine it?

Josie (Drew Barrymore) it's very young, shy, a sympathetic journalist. She lives alone, and in the evenings she embroiders pillowcases for herself. You could say, it's such a typical nerd, a little victim of fate . She could neither dress nor make up. She never even kissed.

One fine day her life changes dramatically. Her boss orders her to prepare a report on contemporary teenagers. The return to high school days is to enable her to do this task. However, not everything is so simple. Josie was part of the group throughout her high school years ,,the worse ones”. She was wearing braces, she was prickly, and her hairstyle cried out to heaven for vengeance. Nobody accepted her, and the self-proclaimed school flies kept making her life miserable. In addition, some high school, like a handsome guy with an overgrown ego, made her a loser shortly before the gala ball at the end of school. Just thinking about those memories, Josie ran to the toilet and … she let go of a beautiful peacock.

Fortunately, the main character pulls herself together and takes up the challenge. This is where the cooler part of the movie begins.

Josie goes to high school again. The first time she came to class, I was thinking, that I will fall. I'm already telling you what's going on! Well, they zoom in on the car. I was thinking, that the boiled main character will get out of it, and yes Josie, but in white pants with a boa scarf over the shoulders.
If that wasn't enough, her problems do not end with unsuccessful styling. It turns out quickly, that today's teenagers do not accept it either. Typical school slips (read kids from wealthy homes with branded cloths, often a bit blunt) they immediately see Josie as a girl, which you can tease a little.

And so the main character tries to get closer to her friends from school, and at the same time does not want to be exposed. To my surprise, Josie is becoming popular because of his brother, who scored this among the students, that he pressed a bucket of coleslaw into himself. O! I would almost forget to add, that from the very beginning he was very intrigued by our clever journalist … English teacher!

I will not continue to tell the stories of the main characters, because I have already revealed too many details (forgive this). Let me tell you one thing. Be sure to reach for this movie, if you are curious : what happened to Josie, which had led to her sudden popularity in school, how her relationship with the teacher developed and whether she finally kissed.

I want to add this from myself, it's a mega bac movie. On the one hand, it concerns such important matters as mutual acceptance or respect, but also shows the school reality with humor. I wouldn't be myself if I didn't mention some funny scene. Well, during one of the lessons (something like educating for family life) Josie shot the English teacher with a condom in the eye. And also my favorite PE scene. The main character runs murderous (it's like seeing myself) and something is panting at the teacher, that she can't do the exercises anymore. The resolute lady from physical education responds to this : ,,Finish it or I will suspend you and you won't get into college.” It blew with terror, no? Generally beware people, because possible PE may destroy your career chances.

I will only add at the end, that each of us can see a part of ourselves in Josie… It really amazed me, that although the movie was shot in a year 1999 most of the situations presented in them were absolutely timely. The rules in this film school were the same as today. Nothing has changed. Then there are films that make up clubs of mutual adoration and all the rest of the typical gray mice, which must hide somewhere in the corners.