Eclipse, that made Albert Einstein a star of science. 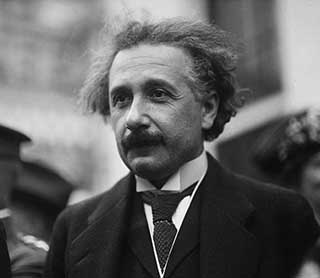 In February 1919 On the year, two teams of astronomers from the observatories in Greenwich and Cambridge traveled to Sobral, Brazil, and Príncipe, respectively (island off the coast of Africa) with advanced equipment, that would allow them to photograph a solar eclipse as it crosses South America, Atlantic Ocean, and Poland on 29 May The purpose of the expedition, arranged by Frank Dyson of the Royal Greenwich Observatory and Arthur Eddington of the University of Cambridge, was to test Albert Einstein's theory of relativity , which was published in 1915 years and was still skeptical by many scientists.

The eclipse provided a rare opportunity to verify one of the essential consequences of general relativity, that is, the gravitational deflection of light. Einstein's theory predicted, that rays of light passing near a massive body in space will be visibly bent, when they follow a curve in space-time formed by the mass of the body. For a ray of light coming from a distant star and passing near the edge of the sun, Einstein calculated the deviation to be approx 1,75 arc second.

Under normal conditions, Einstein's prediction could not be tested for this simple reason, that sunlight drowns out the light of nearby stars, making them invisible to observers on Earth. However, the darkness of the eclipse allowed astronomers to observe and photograph the star field around the sun. By comparing photos with reference photos taken at night, could be measured, how much the presence of the sun has distorted the light of the stars. Conveniently, a cluster of bright stars called the Hyades would appear near the Sun during an eclipse.

On the day of the eclipse, Príncipe's team struggled with occasional overcast skies, and the team in Brazil had to use a lower quality backup telescope, when pictures from the main telescope were out of focus. Ultimately, both teams were able to produce the images.

After several months of analysis, Eddington and Dyson announced in November, that their findings support the theory of general relativity. The media reported it breathlessly. The Times of London announced the 'Science Revolution. A new theory of the universe. The overthrow of Newton's ideas ". "All the lights in the sky", The New York Times announced. The announcement immediately brought Einstein up, medium-known physicist, to international fame. Media coverage generally focused on the renewed nature of Einstein's work, highlighting, that there are only a handful of people in the world, who can understand her. You can argue, that 1919 was a year, in which Einstein's name has become synonymous with superhuman intellectual abilities – enabling a small Einstein-themed goods industry, which still exists today. In 1921 year, he embarked on the first of several world tours.