THE STORK BRINGS THE CHILDREN 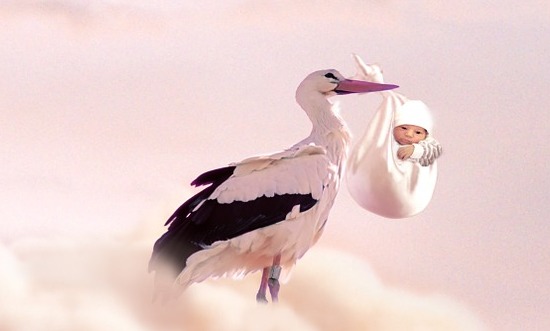 It is a story that is so persistently present in homes, in which there are small children, that most of us believe in it even then, when he knows, that it is not true, isn't it?

This superstition preaches, that storks take babies from the marshes, streams, caves and other similar places, in which reside the souls not yet born, and then they bring them to their homes.

Already many centuries ago was observed, that the stork is a family creature. Aristotle in the year 330 p.n.e. led to this, that in Greece, killing a stork has become a crime. The Romans passed a "stork law” (pour. lex ciconaria), which obligated the children to care for the old, needy parents.

In Roman mythology, the stork was a bird dedicated to the goddess Venus. Fact, that a pair of storks built a nest on the roof of someone else's house, he was considered a blessing to this goddess and a promise of lasting love.

People watching storks know, that the stork returns every year, to build a nest in the same place, and superstitious stork watchers know, that it brings good luck.

It is also said, that when a stork flies over the house, a baby will be born there soon.