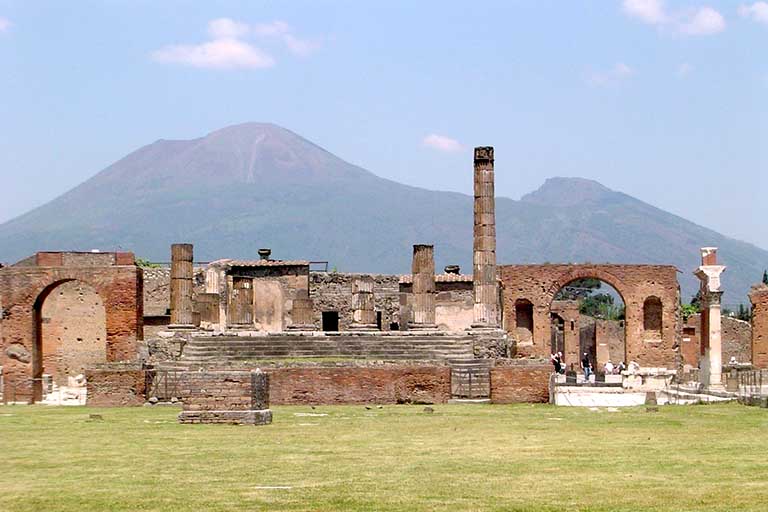 Vesuvius, also known as Mount Vesuvius or the Italian Vesuvio, active volcano, which rises above the Gulf of Naples in the Campania plain in southern Italy. Its western base lies almost above the bay. Cone Height w 2013 year was 4.203 Stop (1.281 meters), but it changes greatly with each major eruption. At a height of approx 1.968 Stop (About 600 meters) starts high, semicircular ridge, called Mount Somme, which encircles the cone from the north and rises in height 3.714 Stop (1.132 meters). Between Mount Somma and the cone is the Giant Valley. At the top of the cone there is a large crater approx 1.000 Stop (About 305 meters) and width 2.000 Stop (About 610 meters), which arose during the eruption in 1944 Year. More than two million people live near Vesuvius and on its lower slopes. There are industrial cities along the coast of the Gulf of Naples, and small agricultural centers on the northern slopes.

Mount Vesuvius was probably slightly less than that 200 000 years ago. Although it is a relatively young volcano, Vesuvius was dormant for centuries before the great eruption in 79 R. neither., who buried the city of Pompeii, Oplontis and Stabiae under the ashes and lapilli, and the city of Herculaneum under an avalanche of mud. Writer Pliny the Younger, who was in a place west of Naples, in two letters to the historian Tacitus he perfectly described this catastrophe. Between 79 a 1037 a year there were several eruptions, w tym te, which took place in 203, 472, 512, 685, 787, 968, 991, 999 i 1007 Year. Outbreaks in 512 the years were so strong, that Theodoric the Great Goth exempted the people living on the slopes of Vesuvius from paying taxes.

After several centuries of silence, series of earthquakes, lasting six months and gradually increasing in strength, preceded a great eruption, which took place 16 of December 1631 Year. Many villages on the volcano's slopes have been destroyed, approx 3000 people, the lava reached the sea, and the sky was darkened for days. Po 1631 year there was a change in the nature of the eruptive volcano, activity became continuous. Two stages could be observed: calm and eruptive. During the resting phase, the volcano's mouth was blocked, while in the eruption phase it was almost constantly open.

Scientific research of the volcano began only at the end of the 18th century. The observatory was opened in 1845 years at height 1.995 Stop (608 meters), and in the 20th century, numerous stations for volcanological measurements were set up at various heights. A large laboratory and a deep tunnel for seismogravimetric measurements were also built.

The slopes of Vesuvius are covered with vineyards and orchards, and the wine grown there is known as Lacrima Christi (pour. “the tears of Christ”); in ancient Pompeii, jugs with wine were often labeled Vesuvinum. Higher, the mountain is covered with groves of oaks and chestnuts, and on the north side, along the slopes of Mount Somma, forests extend all the way to the top. On the west side, chestnut groves give way above 2000 the undulating plateaus overgrown with broom, where the crater after the great eruption from 79 R. neither. has been filled. Even higher, on the slopes of the great cone and on the inner slope of Mount Somma, the surface is almost sterile; during periods of calm it is covered with clumps of meadow plants. 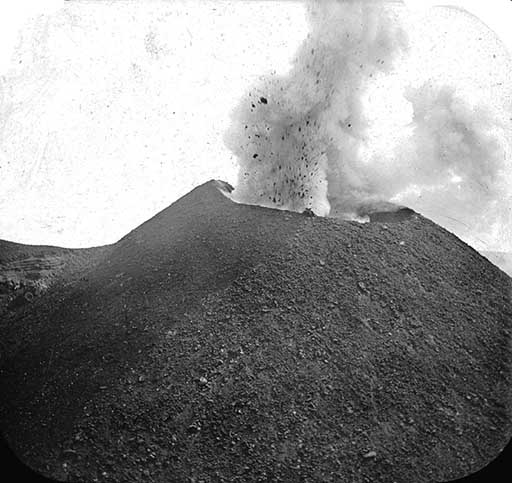 The soil is very fertile, and in the long period of inactivity before the eruption in 1631 R. there were forests and three lakes in the crater, from which the herdsmen drank. During periods of eruption, vegetation on the slope dies down due to volcanic gases. After the eruption in 1906 In the year, forests were planted on the slopes, to protect inhabited places from mud streams, which usually occur after violent eruptions, and in the fertile soil the trees grew quickly.

In 73 year BCE. gladiator Spartacus was besieged by praetor Gaius Claudius Glaber on the barren top of Mount Somma, which was then wide, a flat depression surrounded by rough rocks covered with wild vines. He escaped, twisting the ropes from the branches of the vines and descending through unguarded gaps in the edge. Some of the paintings unearthed at Pompeii and Herculaneum depict the mountain like this, what it looked like before the eruption in 79 R. neither., when it only had one peak.