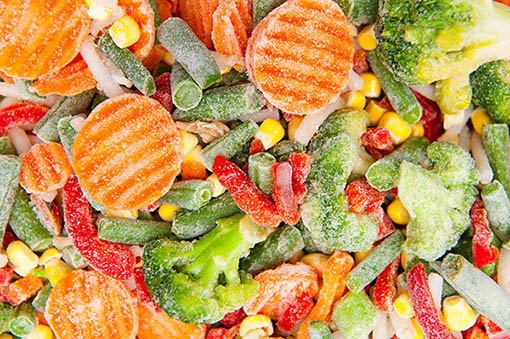 Ways to extend the shelf life of stored vegetables

They influence the quality and commercial value of the harvested vegetables, among others: respiration, transpiration, changes in chemical composition, growth and development (e.g.. rising chives in onions), aging. In Poland, methods are being sought to increase the shelf life of vegetables and to maintain their good quality in trade.

During the storage of onions, losses occur due to a significant reduction in its weight. However, these are natural cavities, related to physiological processes (respiration, transpiration), infestation by pathogens and sprouting. Activation of the germination process causes, that the number of onion storage losses increases. This process can be prevented and reduced, using a properly selected preparation from the group of growth regulators before the planned harvest. The most commonly used is maleic hydrazide, which also inhibits the growth of root vegetables during storage.

Irradiation is another way to reduce losses. This treatment, often called "cold pasteurization", involves exposing food to ionizing radiation to kill bacteria and reduce enzyme activity. The fruit is irradiated, vegetables to extend their shelf life. Several methods of irradiation are used in food processing, e.g.: gamma radiation. The disadvantages of irradiation include loss of nutritional value and low consumer acceptance of irradiated products., by what, this method is rarely used, although it is allowed in many countries. According to the attachment 1, Regulations of the Minister of Health z 15 January, 2003R. (Journal of Laws of 4 brand, 2003, Journal of Laws. 03.37.327) potatoes are allowed for sale in Poland, onion, Garlic, mushrooms, dry spices, dried mushrooms, dried vegetables, subjected to ionizing irradiation. According to the standards in force, all irradiated vegetables should be specially marked.

To reduce rot in stored vegetables, intended for consumption, authorized plant protection products may be used only before harvesting. In addition to chemicals, many biopreparations safe for the environment and human health are introduced for protection. And also noble gases (ozone, argon), which may inhibit paralysis during storage. Ozone has been shown to be effective in combating Botrytis cinerea Pers and Sclerotinia sclerotiorum de Bary during the storage of carrots. The infected and healthy carrot roots were stored in the chambers, through which a stream of air containing a certain amount of ozone was passed, at the right speed within a certain time. For both pathogens, inhibition of microflora development was obtained at the level 50% at the highest concentration. This gas is a strong oxidant, working on the surface, causing the destruction of fungi and bacteria in the storage rooms, in the atmosphere and on the surface of stored vegetables. It is recommended to use ozone for disinfecting warehouses, packaging for storing and transporting vegetables. In some countries it is used to store onions, carrots and potatoes, mainly to reduce infestation with pathogenic microorganisms. More and more often it is used to disinfect cut vegetables intended for direct consumption, or minimally processed vegetables, as it quickly degrades into oxygen, without changing the smell and residue, unlike other preparations used. Ozone also has an effect on purifying the air of ethylene, which accelerates the aging of vegetables.

One of the physical methods used in practice, is to treat vegetables with hot water (52º do 56º C) or steam for a short period 3 do 10 seconds. This removes pathogenic organisms from the surface of vegetables. In the case of pepper fruits, immersion in hot water distributes the wax evenly on the surface of the fruit, which seals the smallest mechanical damage to the skin and prevents the penetration of pathogenic bacteria and fungi.

Losses in the storage of vegetables may occur due to transpiration. To prevent this, foil packaging is used to store perishable and quickly wilting vegetables (lettuces, vegetable parsley, broccoli, celery). Types of foil:

• Heat shrinkable – it is most often made of PVC or polyethylene, which, as a result of initial stress, obtain the ability to shrink under the influence of increased temperature. For this purpose, the product, after wrapping with foil and welding its edges, placed in the heating tunnel for a few seconds, where, at a temperature of about 140-160 ° C, the film shrinks. Air and water vapor from the inside of the package may escape through the holes made when the film is unwound from the roll.

• Stretchy – which is wrapped around individual vegetables (broccoli, Chinese cabbage) or fruit on polystyrene trays (tomatoes, pepper). The permeability of the film to gases and water vapor is high and is therefore intended for short-term storage.

• With macro – or microperforation – films used for packing vegetables, to avoid excessive concentration and condensation, as well as too much decrease in oxygen content and increase in carbon dioxide concentration. Excessive air humidity in the packaging can lead to the rapid growth of fungal pathogens and rotting of the packed product. On the other hand, the lack of oxygen causes the initiation of anaerobic respiration, accumulation of ethyl alcohol and acetaldehyde and, as a result, changes in the sensory characteristics of vegetables.

Another way to prevent vegetables from wilting is by waxing the fruit. Waxes are protective layers, which are multi-constituent substances of natural origin with a composition similar to natural wax. Their function is to grant protection, gloss and preservation of the firmness of fresh ingredients. The use of edible coatings on fresh fruit and vegetables just after the post-harvest period is a very important procedure extending their shelf life. The protective layer regulates the breathing processes, inhibits the loss of moisture, protects against undesirable factors of the external environment and pathogens.