Why do bananas turn brown? 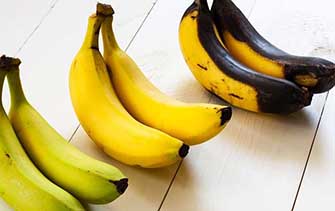 The life cycle of a banana is colorful – starts with dark green, turns into a delicious yellow, and it ends (if not eaten beforehand) for unappetizing brown. But what causes this color change and what does, that the banana goes from the green to the dark side? As it turns out, bananas are a bit too gassy for their own good.

Bananas, as do most fruits, they make and react with an airborne hormone called ethylene, which helps signal the maturation process. The unripe fruit is firm, more acidic than sweet, and possibly has a greenish tinge due to the presence of chlorophyll, a molecule found in plants, which is important in photosynthesis. When the fruit comes in contact with ethylene gas, the acids in the fruit begin to break down, they become softer, and green chlorophyll pigments are broken down and replaced – in the case of bananas, they have a yellow tinge. Losing the sour taste and hardening inside means sweeter, tastier and more mushroom fruit – perfect for eating!

However, unlike most fruits, which produce only a small amount of ethylene during maturation, bananas produce a large amount. Whereas a banana may become sweeter and turn yellow at the beginning of the ripening process, will eventually mature, producing too much of its own ethylene. Large amounts of ethylene cause, that the yellow pigments in bananas break down into their characteristic brown patches by a process called enzymatic browning. This natural browning process is also seen when the fruit is bruised. A damaged or crushed banana will produce even more ethylene, maturing (and turning brown) faster than undamaged. Looks like it, that your grandma was right – a green banana put in a brown paper bag will mature faster due to all the ethylene trapped inside. But if the fruit is put in its own gas prison for too long, it will mature and rot.