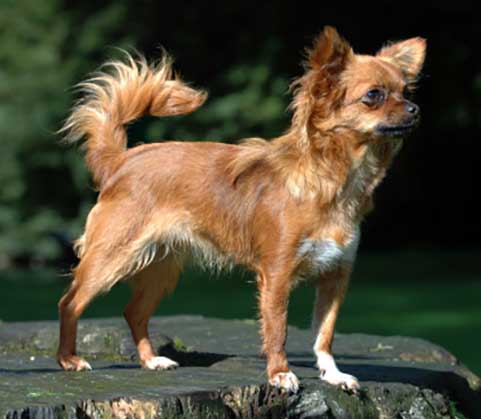 Chihuahua, with your weight in between 0,5 a 3 Kg, is the smallest dog in the world. There are two varieties of this breed: short-haired (smooth-haired) and long-haired.

It is believed, that the progenitor of the chihuahua already existed in the 5th century CE, even before the Maya came to Mexico. These little dogs probably served the Maya as sacrifices to win the favor of the gods before they died. You know, that the Toltecs, living in Mexico in the 9th century AD, they kept dogs called "techichi". They were small quadrupeds with long hair, and their characteristic was this, that they were not barking.
Technical figures, discovered in Huejotzingo Monastery near Mexico City, show dogs that are confusingly similar to chihuahuas. K. dc Plinde, Mexican breeder and expert on chihuahua, claims, that modern chihuahuas came from a combination of techichi and a small hairless dog, which came overland from Asia to Alaska, when the Asian and American continents were not yet separated by the Bering Strait. It is believed, that the chihuahua inherited even smaller sizes from the newcomer. Chihuahua ancestors were highly regarded ornamental dogs as well as indispensable participants in Toltec and Aztec religious ceremonies.

The first specimens of modern chihuahuas were discovered in the year 1850 by tourists visiting the Mexican state of Chihuahua. The little dogs quickly gained popularity. Some were paid in gold more than their body weight. The breed gained attention again in a year 1890 when opera singer Adelina Patti received a baby chihuahua in a bouquet of flowers from the President of Mexico.
The filigree chihihuahua has a compact, rectangular body structure, is a bold vigilant dog. The head is round like an apple, the edge of the forehead is clear, kufa (maybe) moderately short and pointed. Eyes, as well as the ears,
they are large and set wide apart. The tail is curled and carried over the back.
Race is intelligent, attachment and loyalty to the owner, while distrust of strangers. All colors are allowed.