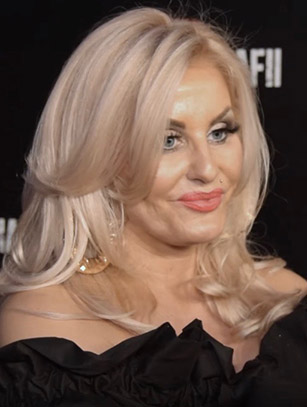 Dagmara Kaźmierska (Born. 1975) is a Polish television personality and non-professional actress. She is known from the program on TTV entitled. Queens of life.

Dagmara Kaźmierska was born 12 April 1975 year in Kłodzko (voiv. Lower Silesia). He comes from this town.

From childhood, Dagmara was taught to respect work. In the early years, she helped her mother in the store. When she finished school, she decided to earn for herself. She left for Germany, where she took up a hard job as a cleaning lady. During her stay in Germany, Dagmara learned German and her next job was a casino. The new profession brought her higher earnings, but it has also become a cause of addiction to gambling. Over time, she invested in her own machines, to get big profits from them.

After returning to Poland, Dagmara found herself in the center of gangster accounts, in which her then husband took part. In 2001 the year between "Szpila" (one of the most dangerous criminals in the region), and the then husband of Dagmara Paweł K.. there was an argument, as a result of which Paweł K.. shot Dariusz L.. Police information talked about it, that there was a struggle for influence, because "Szpila" ran a competitive escort agency in Kłodzko. It is also spoken informally, that "Szpila" had been at Dagmara's house a few hours before his death, who was pregnant at the time and was threatening her with a gun in her hand. Paweł K. then he had the choice of the life of his woman and child, or of a ruthless gangster. He was detained several months later.

Birth of a son

In 2001 The son of Dagmara Kaźmierska and Paweł K was born in the world. – Conan Shingoo. Her husband chose the names for her son, which Dagmara talks about, that he has the soul of a warrior. Her son can sometimes be seen on the program The Queens of Life, and Dagmara gladly boasts of photos with him on Instagram.

From 2006 years Dagmara Kaźmierska was through 4 years owner of an escort agency. In 2009 year at the request of the District Prosecutor's Office in Świdnica, she was arrested and sentenced with a final judgment for acting in an organized criminal group, sutenerstwo, pimping and forcing young women into prostitution. Dagmara spent several months in prison. In an interview for klodzko.naszemiasto.pl she spoke about this situation: – Nigdy bym tego nie zrobiła. I wouldn't have survived the separation from my son a second time. He is the most important to me. Missing him was very hard for me, unbearable. It was an even worse experience for him. My business has led to disastrous consequences. I can never do something like this to my child again. I can't put him apart again.

Readers' comments to the article indicated, that Dagmara raised the issue of separating from her son, but she probably did not fully understand the extent of the harm she had caused.

From 2016 of the year, Dagmara is a participant in the reality show on TTV entitled. Queens of life. It is one of the most watched programs on this television, what happens thanks to the colorful characters, that is Dagmara and her friends Jacek and Edzia. In 2018 year Dagmara was the heroine of the program Fri.. Made in Maroko, where they traveled to Morocco with their friend Jacek, and their every step was followed by a camera. They are both known to tease each other and disagree on many topics, so there was no shortage of emotions. In 2019 Dagmara Kaźmierska starred in Patryk Vega's film Women of the Mafia 2, next to such stars as Piotr Adamczyk, Agnieszka Dygant and Katarzyna Warnke. Dagmara Kaźmierska lives in Kłodzko (voiv. Lower Silesia). In 2017 of the year she opened the "Queen" disco there, and in Kudowa-Zdrój he runs his Viva La Queen boutique, where you can buy expensive, luksusowe ubrania i dodatki.

Parting with her husband

In 2017 Dagmara broke up with her husband, with whom she was associated by 21 Years. In 2020 year was associated with a younger man, she was even planning a wedding with him, however, nothing came of it.

Further fate of the son

In February 2020 In the year her son Conan was having a prom, then he had a secondary school-leaving examination. Dagmara said in one of the interviews, that she cares, for Conan to get into medicine. However, her son cheated, that he wants to become a psychiatrist. At the end of September, the proud mother shared the news, that her son will be studying physician at the Medical University from October

She has appeared in episodes of programs such as: holiday diaries (2016), Fault (2017) and Sharp cut (2018). Dagmara admits, that she can't cook. He and his friend decided to wash the dog at the car wash, fortunately, however, they changed their mind in time. In one of the episodes of the program she spoke, that she passed her high school diploma, and then she studied law. Most likely, she did not complete her studies.

“The series is my life, in a nutshell, of course. Everything is assembled like this, so that the viewer is curious and that is why moments of rest or boredom are cut out. Nevertheless, it's all me on the show, my family and friends. There is no fiction here. "

"Of course, that I was arranging my house myself. Hardly anyone has such kitschy taste as me!”

"I have to say, that I am pleasantly surprised by the positive reactions of people and the sympathy I arouse. Of course there are people, who care about my past very much, and they pull it out at every opportunity. When I decided to participate in the program, I took it into account. Nevertheless, the vast majority gave me absolution and I thank the audience for that. "