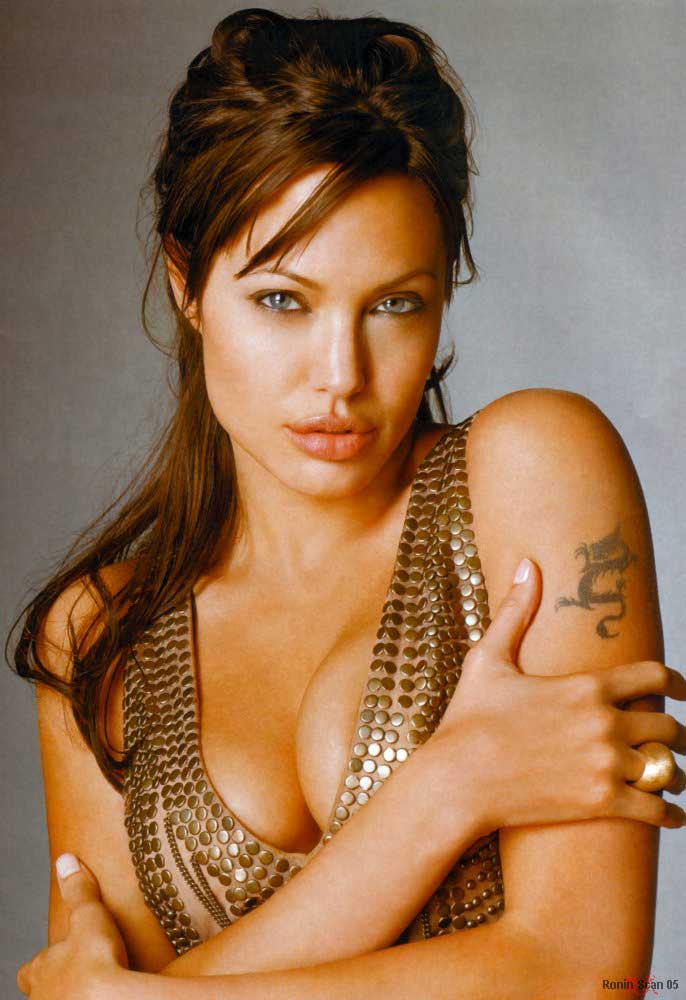 Angelina Jolie owner. Angelina Jolie Voight actress
Born. 4 June 1975 Los Angeles, state of California, USA.
Angelina Jolie, corona Jon Voight (“Night cowboy”) and actresses and models Marcheline Bertrand, She is now considered one of the most interesting performers in American cinema. Despite her young age, she already has three Golden Globes and an Oscar. In 2000 R. warehouse “People” put her name in the middle 50 the most beautiful people in the world. So does the big brother, actor and director James Haven, she did not use her father's name.

She belonged to very rebellious children. She didn't want to go to school, she got involved with a group of punks. Parents decided to interest her in acting. When she had 11 for years they enrolled her in courses at the famous Lee Strasberg Theater Institute in Los Angeles. However, she made her debut in front of the camera a few years earlier, next to his father, in the little-known film by Hal Ashby – “Looking to Get Out” (1982).
At the age of 16 years she decided to become independent and started working as a model. She's been in several music videos, m.in. Meat Loafa, Lemonheads, Lenny Kravitz and the Rolling Stones. She also appeared in James' student etudes. Eventually, she decided to study at the Film Department of New York University. After returning to Los Angeles, she joined the Met Theater Group, where she played, among others. obok Eda Harrisa i Holly Hunter.

On the screen, she began to constantly appear in 1993 R. First, there was a supporting role for a female cyborg in a not-so-successful science fiction film “Cyborg II: Glass Shadows” Michael Schroeder. Two years later, in “Hackers” Iaina Softleya got her first lead role. The film was received quite coolly, however, Jolie herself has received favorable reviews. On the set, she met and became involved with the English actor Jonny Lee Miller (“Trainspotting”, “Plunkett i Macleane”). The tabloid press wrote passionately about their wedding ceremony – entire articles were devoted to the actress's outfit: black leather pants and a blouse, on which she wrote her partner's name with her own blood. Despite the sacrifice, the relationship did not last long: the separation was announced after several months, and the divorce case was finalized in 2000 R.

Regardless of the ups and downs in private life, Jolie's career was gaining momentum. The actress performed a lot and in a very diverse repertoire. Gradually, she gained better and better ratings from critics and viewers. After sensational “Without Evidence” (1995), where she played the role of a drug addict, starred in two comedies: next to Michael Biehn in “Mojave Moon” (1996) Kevin Dowling and v “Love Is All There Is” (1996) Josepha Bologni i Renee Taylor, where she fell in love with the son of the owners of a competing restaurant. It was also included in the adaptation of Joyce Carol Oates' novel – “Foxfire” (too 1996), where she played the mysterious outsider Margret 'Legs’ Sadovsky, named by the magazine “Variety” – “the female counterpart of James Dean”. In 1997 R. was accompanied by, among others. David Duchovny in the drama “Playing God” Andy Wilson.
In the same year, however, a role in the TV film by John Frankenheimer turned out to be more important – “George Wallace”. The role of Cornelia Wallace earned Jolie her first Golden Globe statuette and an Emmy nomination. More awards, including the Screen Actors Guild statuette, Golden Satellite Award, Golden Globe and a second Emmy nomination, they sprinkled for her role as a model addicted to drugs and dying of AIDS – Gii Carangi in a picture produced by HBO TV “Family” (1998). At the end of the years 90. the actress began to play increasingly important roles in more and more important productions. On the set “Fatigue of the material” (1999) Mike Newell met Billy Bob Thornton, whom she married after divorcing Miller, 5 May 2000 R. In “Bone collectors” Phillip Noyce played the role of a young policewoman, who, with the help of Denzel Washington, is investigating a serial killer.
This time, she was nominated for the Blockbuster video rental award. The role of Lisa Rowe in “Interrupted music lesson” (too 1999) James Mangold based on the novel by Susanna Kaysen.
She overshadowed her partner from the set with her performance – Winonę Ryder. The performance of the emotionally disturbed girl earned her an Oscar for Best Supporting Actress and a Golden Globe, Screen Actors Guild Award and Blockbuster Award. After completing work on a sensational film “60 seconds” (2000) produced by Jerry Bruckheimer, where she partnered with Nicholas Cage, found herself as Lara Croft on a blockbuster movie “Tomb Raider” (2001), based on the famous computer game. Among her latest films are “Orginal Sin” (2001) and “Life or Something Like It” (2002). In 2000 R. Angelina received the Actress of the Year award at the Hollywood Film Festival. Her second great passion, apart from acting, are tattoos.