Bogusław Kaczmarczyk, Born. 11 December 1974 in Krakow. A graduate of the Acting School in Krakow.
He devoted his childhood and youth to ballroom dancing and sports rocendrol, in the next stage of dance development, he became an instructor. As a student he participated with Maciej Stuhr in the cabaret "Artur I." - winner of the 1st prize of Pak cabarets in Krakow, where the idea to set up your own cabaret by Maciej Stuhr - winner of all cabaret reviews in Poland - "Po Żarcie" was born. 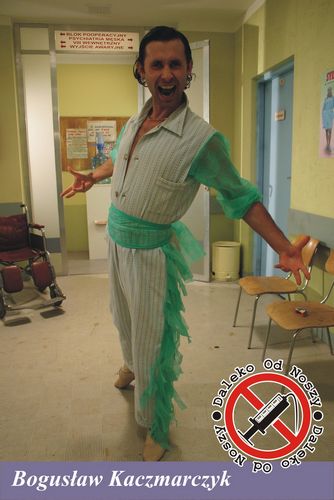 He sang in the cabaret "Loch Camelot" in Krakow in a duet with Dominik Kwaśniewski (artist of Piwnica pod Baranami). Laureate of sung poetry reviews. (The hit "Bolero" continued 16 weeks on the Marek Niedźwiedzki charts of the 3rd PR program)

"For good or bad" - the role of Staszek, a reservist and a continuation in later episodes
"Ship crazy, that is, we are swimming ”- a cyclical entertainment program of public TV – he acted in several roles in this show. Directed by Leszek Kumański.
"Examining Life" - cabaret artist
"Far From the stretcher" - the eternal patient