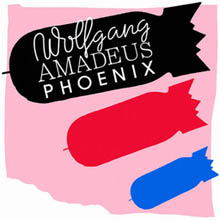 The world is ending! The French sing in English. And not some of the distant islands. Out of Paris, from Versailles! If anyone still had doubts, that we are slowly becoming a global village this is the moment, to abandon them.

Apparently, the desire to gain a wider audience overcame resistance to compromising the ideals of Greater France. And very well, because thanks to this we received the album of the band Phoenix, entitled… Wolfgang Amadeus Phoenix. Someone has a good opinion of themselves ... But deservedly!

The album won in 2010 of the year with the Grammy Award and landed at the forefront of virtually all the best albums lists 2009 - from Spin magazine to Rolling Stone. For many people, it was then that the Phoenix group appeared in the musical sky, even though it was their fourth album, and they have been playing together since the early nineties!

The fact also contributed to the popularity, że pierwszy singiel ‘1901’ promoting the album was released on the internet for free. It would seem, that this is nothing unusual and is a very logical step, however, no record labels approve of such experiments!

But let's move on to the clue, that is to the music!

Above all, the album is extremely joyful and coherent. Songs one to ten flow very smoothly - which is not so common in the playlist era. Its mood is somewhat reminiscent of some of Franz Ferdinand's songs, the drums sound gently like on the best Cure albums, and a very melodic vocal could easily fit into completely pop recordings. Trochę to przypomina album Angles, Strokesów.

Importantly, the album is liked from the first listening. Track number 1 - Lisztomania - she just stays with us. It is so cheerful and fresh, that we actually want to rehearse him right away. The text is a bit non-grammatical, but hey! The french speak english, let's not complain. Immediately after Lisztomania, the aforementioned one appears 1901, a little heavier and just as successful. The album slows down for a track Fences, and then it flows briskly to the end, with a nice form apex in and around Girlfriend. Guitarist of the band, Laurent Brancowitz describes their playing style as "very European.", very continental. The same is true of our texts - we mainly write about Paris and death. "

The album is two years old, but if you have managed not to notice it so far - and me - I definitely recommend it!

Finally, two words about the band. It was founded by three childhood buddies: Thomasa Marsa, bassist Deck d'Arcy and guitarist Chris Mazzalai. They met in "the only music store in the whole town". Laurent Brancowitz later joined them (grał wcześniej w zespole Darlin’, whose members later founded ... Daft Punk - that's just to prove the theory, that the music world is extremely small). They talk about their beginnings in a humorous way: “We came from a place, where everything was great and historic. We grew up in a museum. Dlatego bardzo ważnym było dla nas granie muzyki, which was modern, fresh (…) In the beginning, we were probably the only music band in the whole of Versailles (…) We didn't start our band, to appeal to girls, because there weren't any interesting girls in town, we didn't do it for popularity, because there was nowhere to perform anyway. "

The first album was released in 1997 year and since then they release a new album every few years. However, only the above-mentioned album brought them "success". It's impossible not to like the band, whose style the guitarist describes like this: “We love the aesthetics of minimalism. This is partly due to the architecture of Versailles, and in part a fact, that we don't know how to play very well. "

From other curiosities, Thomas Mars is the husband of Sofia Coppola and through him the team recorded part of the soundtrack to the great movie "Lost in Translation"