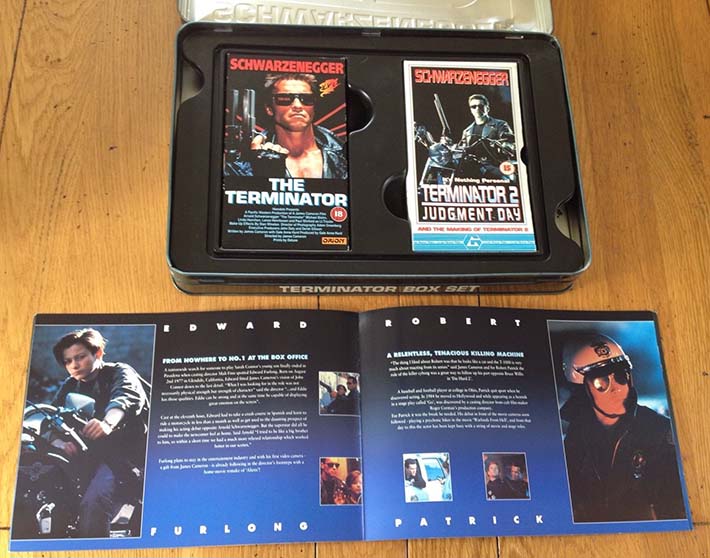 Both Terminatory James Cameron, is undoubtedly at the forefront of science fiction films. The director managed to create a perfectly balanced story, with elements of action cinema and a slightly more ambitious message. It's also hard to find in the movie world, the second such case, so that the sequel turns out to be equally outstanding, and in my opinion even better than the first part.

It would be a sin to omit Arnold Schwarzenegger, who created his best role in Terminator and snuck in thanks to the famous line I’ll be back on the list of the most famous recent movie quotes 100 Years. Despite the, that Cameron's works constitute a certain closed whole, fans can not give the director to this day, that he abandoned his child and did not take care of the third part.

Today I would like to focus on the first two Terminators, or more precisely, on the absolutely wonderful release of these films on the VHS medium. Auto Terminator i Terminator 2 in the metalbox!

I bought the edition about two years ago. I came across them quite by accident on the Allegro website, and that the price was downright ridiculous, I clicked buy now without hesitation. After receiving the package, I was delighted with what I just got for a long time. It is just like that miracle, and the fact adds charm, that there are two cassettes inside VHS. It is nice on the heart, to mind, that even in the days of videotapes, publishers cared about collectors, who are just waiting for such gems. The metal packaging also includes a few-page booklet with the main characters and some interesting information about the film..

He has my copy, signs of use on the collective packaging, and, above all, the passage of time time. Can be seen, that the release was not too pampered at the first owner, however, it does not bother me at all. It only adds to the charm and makes it good, that the edition seems to have souls, at the thought of how many years it has sat, covered with dust, buried deep in the attic.

This is definitely one of the treasures in my collection, that is why, it's more than a movie, it is primarily a memory of childhood and first years fascination cinema.

Because, that this is a VHS release, I will refrain from judging the image and audio quality, and only the packaging itself will be assessed.